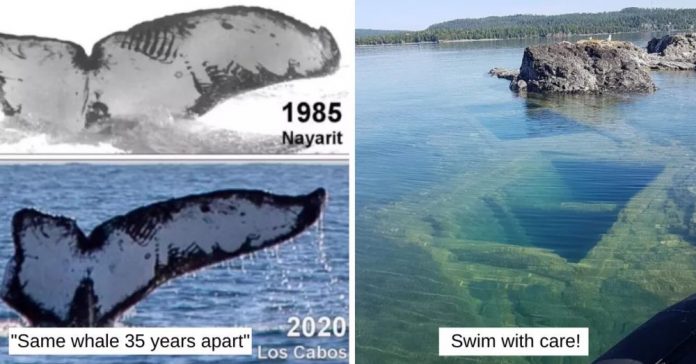 There are lots of wonders in our world. We here facts and information every day we’ve never heard of before.

Here are some photos that enlighten and entertain us.

This is a long exposure picture of fireflies or lightning bugs. Their flashes of light tend to get around while they’re lit up while they are usually momentary.

The University of Ohio lets students dictate where they should go rather than creating designated walking paths around campus. The university paved over the paths when enough students crossing campus had worn the paths they needed to get around.

It was taken at Germany’s Konigstein Castle. If you look at the bottom right of the pic, you can see how a human measure up to a castle’s walls.

These bright beauties are “Indigo Rose” tomatoes and the flesh inside is more red than purple.

Space flight is just as impressive from this angle at 34,000 feet as it is from the ground. NASA’s Vehicle Assembly Building at Kennedy Space Center is in the middle of the image. The two structures down the road from it are launch pads.

You might have to cross the world’s longest conveyor belt in Western Sahara. It stretches 61 miles, from a phosphate mine in Morocco at one end to the ocean at the other end.

A feature of cultural festivals in Catalonia is the tradition of building human towers or “castells” up to 10 layers tall. It all started as way back in the early 18th century. Today, it’s a sport with an annual championship. The spots at the top are usually children as they’re so small and light and also they wear helmets to build human towers so tall.

The corpse flower stinks up a stench that’s often compared to rotting beef. People will gather around to see it open up and unleash that horrific stench as they tend to only bloom once every eight years, and only open up for about a day when they do.

This whale likes the warmer waters off Mexico’s Pacific coast, as it was spotted just outside the Baja on both occasions.

You’d want to be careful around this abandoned silver mine shaft near Thunder Bay, Ontario if you’re feeling extra warm.