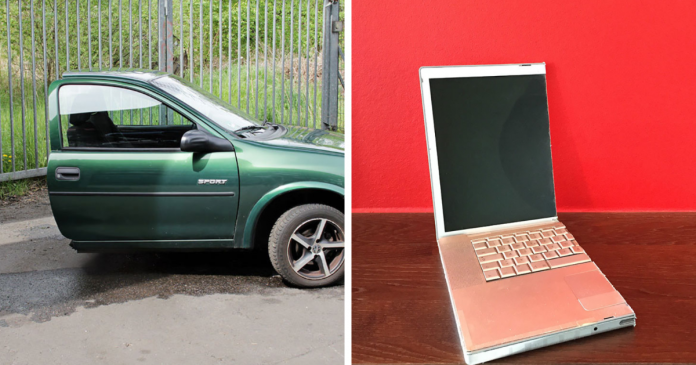 When someone finds out that their spouse cheated on them, they act really weird. There are many horror stories of women destroying their significant other’s car or other personal belongings. But we found an interesting story recently in Germany. A man found out that his wife had cheated on him and the couple was ordered to split everything in half, 50/50, straight down the middle upon getting divorced. This man sold half of everything on eBay and added some amazing descriptions for each item. I hope he made some money off of it. Here are the items he sold with his own descriptions.

#1 Bed – “Unlike my ex-wife, I cannot say anything bad about the bed, really, have always slept well in it.”

#2. Bike – “The wheel moves despite minor limitations, and the front brake engages perfectly.”

#3. Car – “The car is quite well-preserved for its age, but there are some signs of wear. In particular, half is missing”

#4. Chairs – “The chairs are super as an art installation.”

#5. Couch – “In recent years, I’ve spent many beautiful evenings on this sofa with my woman. She did not find the evenings so beautiful, which is why my ex-wife now sits on another couch.”

#6. DVD – “Unfortunately, I can offer only half… But no matter, I have made sure that the best sketches are on my half.”

#7 . DVD Player – “Whoever wonders where the second half is may want to check with my ex-wife.”

#8. Helmet – He doesn’t have much of a comment on this but he does say, “Thank you for 12 ‘beautiful years, Laura!’ You’ve really earned half. Greetings also to my successor.”

#9. iPhone – “It is considerably smaller and more manageable. In addition, you will finally be at peace with this phone: It is guaranteed not to ring and vibrate and will not play music.”

#10. Laptop Computer – “In my opinion, this conversion is the perfect solution for users who want to save space, but can not afford a MacBook Air.”

#11. Mailbox & Closet – He went pretty far with this one and pushed the limits, but at least he was consistent.

#12. Cordless Phone – “It’s the perfect phone for people who do not like to make calls.”

#13. Vinyl Record – “I offer here, in my opinion, the best REM album… “Everybody Hurts” (how true!!!) and Nightswimming are the best passages on it yet.”

#14. Teddy Bear – “There’s no need for cuddling stuffed animals – for such things, there are affectionate co-workers.”

#15. Television – “Watching TV alone is already depressing enough. The device is very compact and has several inputs, but am not sure whether they all work.”

Here’s how he cut everything in half.

See the sense of humor this man has after 12 years. It sounds like Laura, his ex-wife, was getting a little too close and cuddly with a co-worker from the sound of his quotes. Just imagine how she felt when he gave her half of everything, literally. It’s a fresh start since both of them have to purchase everything in the near future! He may have let out his anger while cutting everything in half. I am sure it made him feel pretty good even if this was cheaper than therapy.