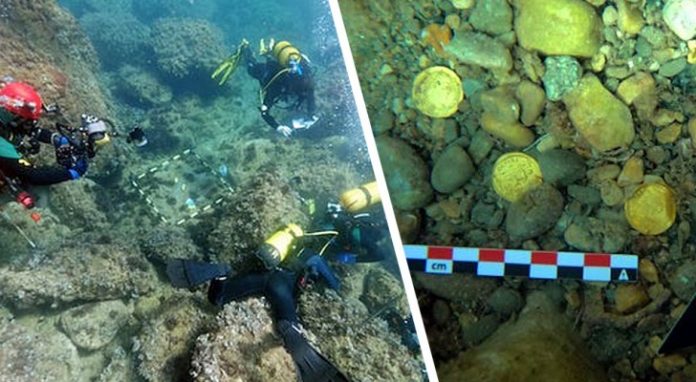 Sometimes the biggest and most sensational discoveries come about by chance – in a way, a place, and a time that no one expects. If you don’t believe us, ask amateur divers in Spain who stumbled upon what archaeologists didn’t hesitate to call a real treasure.

In fact, one can only adhere to this definition, since it is one of the largest collections of gold coins dating from the Roman era ever found in Europe. And, in addition to the chance of discovery, these precious objects were in an astonishing state of preservation , as if no year had passed.

Imagine the situation: Luis Lens and César Gimeno were on vacation in Xabia, Spain, and during what seemed like an ordinary dive to clean up garbage from the seabed, they found something else.

On the first dive, according to the two divers, who are brothers-in-law, they came across a shiny object that looked like a “dime”. Intrigued, they approached it and retrieved it. It was then that they were able to notice an inscription in ancient characters, with a face. Naturally, their curiosity increased: it was very likely that it was a valuable item, as well as an antique.

Using a Swiss army knife, they were able to discover that, in these rocks at the bottom of the Mediterranean, the first piece they noticed was not the only one. There were seven other rooms in a crevice, all in excellent condition. Astonished by what they saw, Luis and César immediately reported their find to local authorities. So a team of underwater researchers explored the site in depth, and what came out is incredible.

A total of 53 coins were buried underground , which, according to the researchers, represents “one of the largest collections of Roman gold coins ever discovered in Spain and Europe”. This is what said Jaime Molina, head of the team of researchers at the University of Alicante who participated in this sensational discovery.

This very old silver, probably dating from the 4th and 5th centuries AD , was found next to the remains of a chest, which could suggest that it was a real treasure, of the kind that the ‘we are used to seeing in fantastic stories. Hiding it there, in the depths of the Mediterranean, could be the act of someone who, fearing the invasions of barbarian peoples such as the Swabians, the Alans or the Vandals, wanted to avoid its plunder. A fascinating glimpse into life at a fundamental historical moment such as the one before the fall of the Western Roman Empire.

“ Finding a treasure is every child’s dream ,” commented the two divers, both enthusiastic and amazed. The pieces, once restored, will be exhibited at the Archaeological Museum of Xabia, and who knows if these depths will be able to restore us other equally spectacular testimonies!