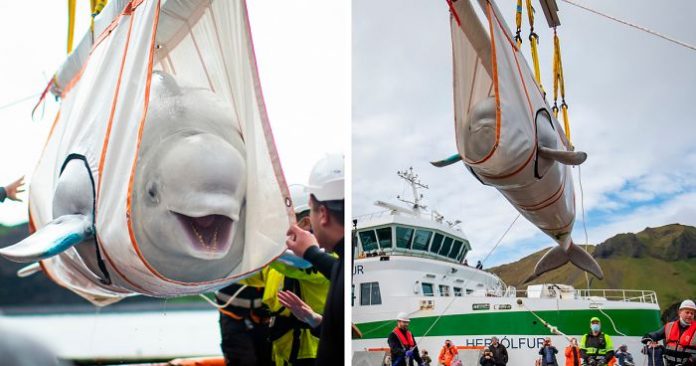 This beluga whale has a big smile on his face as he’s finally been taken back to the ocean after being kept in captivity where he was forced to perform tricks.

This is the first time the belugas see the sea as in 2011, they were captured by a Russian whale research center and later taken to a water park in China.

Two whales are named as Little Grey and Little White, now they have been kept in a care pool as they need time to get used to their new environment before they are released into a larger sanctuary in Klettsvik Bay off the south coast of the country.

A year ago, these two had been transported from China to a care facility on the Icelandic island of Vestmannaeyjar and now their 6,000-mile journey has finally come to a happy end.

Sea Life Trust is a British charity that organized the journey for Little Grey and Little White’s ultimate freedom. The cetaceans traveled by air and boat. Before their final release into the wider sanctuary, the pair were being quarantined and acclimated to their temporary home at Klettsvik Bay. In order to make them prepare for the colder temperatures, they have been living in a temporary care facility to add more blubber.

Audrey Padgett, the Beluga Whale Sanctuary’s general manager, told CNN on a video call in front of the belugas, “It’s been quite the journey for these two. It hasn’t been easy, but it’s definitely been a labor of love.”

They traveled on a Boeing 747-400ERF cargo aircraft. The belugas had been placed and carried in specially designed slings with foam to cushion them from any turbulence for their trip to Iceland.

Andy Bool, head of the Sea Life Trust stated, “We’re absolutely delighted to be able to share the news that Little Grey and Little White are safely in their sea sanctuary care pools and are just one step away from being released into their open water home.”

“Following extensive planning and rehearsals, the first stage of their release back to the ocean was as smooth as we had hoped and planned for.”

“We are carefully monitoring Little Grey and Little White with our expert care team and veterinarians and hope to announce their final release very soon.”

There are around 200,000 beluga whales in the wild and in distinctive white color and only grow up to 4 meters in length which is about twice the height of an adult human male.

Padgett said that the belugas’ new home, run by the Sea Life Trust charity, is a much “larger, natural environment” with lots of potential benefits.

She also told CNN that more than 300 belugas are in captivity around the world. “Some belugas are in cramped and unsuitable conditions. And if what we can learn here from Little White and Little Grey can help improve welfare for other animals … that’s really the point.”

Padgett stressed that moving two belugas was no easy task even though she wasn’t involved in the logistics of transporting the whales from China.

These two each weigh a little more than a ton and they need around 110 pounds of fish per day between them.

Padgett added that the operation involved specially designed equipment, veterinarians, and a whole lot of water and ice to keep them hosed down.

According to Padgett, the belugas had bespoke “stretchers” or slings to move them overland, and the team did some “practice runs” to get them used to being moved via trucks, tugboats, and cranes.

“If you’re trying to take your cat or your dog somewhere, you want them to have a positive association with travel … We had to make the belugas a comfortable as possible.”

The whales were kept in a care facility with a quarantine pool for several months, in order to adjust to the colder Icelandic environment after their arrival in Iceland.

The Covid-19 pandemic complicated the journey even though the final leg of the journey from the care facility to the sanctuary was a shorter one.

“We also needed to protect our staff and put them into quarantine, because we need our people to take care of our animals.”

Little Grey and Little White’s odyssey isn’t not over. Now they are in an “acclimatization space” within the sanctuary which helps them to adjust safely to their new home.

According to Padgett, they will have free rein of the sanctuary any day now.

The two whales will be assessed around the clock as they get used to being back in the ocean environment.

Padgett explains that the whole operation also helps humans understand belugas better while the whales benefit from more space to explore and new kinds of seaweed, kelp, and fish to enjoy.

“It’s kind of the finish line for these two. But it’s a new chapter for belugas around the world.”

Check Out The Video Below To Learn More About The Operation