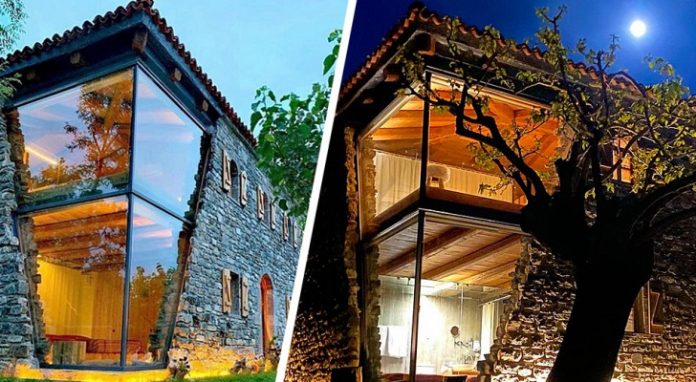 The renovation of an old country house is certainly a unique experience, as stimulating as it is satisfying. When you find yourself in front of a building of this type, you very often have to deal with a sort of ruin, where everything seems destined to be reorganized or redesigned from scratch.

And yet, for architects, designers, engineers, and, of course, owners, these are often the most interesting and exciting challenges to overcome from a professional point of view. The owners of the Albanian farm that we are going to tell you about know something about it. They decided to opt for a solution as innovative as it was traditional in order to restore their farm. So much so that in a short time, the image of the structure has toured the world, becoming an original example of architecture and building renovation.

Old, yes, but with a very obvious touch of novelty and modernity. This is how one could sum up the philosophy behind the renovation of the Mrizi I Zanave farm, located in the district of Lezha, in the north of Albania, about 80 km from the capital Tirana.

The history of this building has unfortunately been marked by a catastrophic event. In 1979, a very strong earthquake caused the collapse of an entire part of the farm building. But since this sad episode, everything has changed.

For years, the building remained in this sorry state, until it was decided to entrust its restoration to the Plis Atelier studio. It was the architects of this design firm who created the “detail” that made this place famous.

The collapsed wall now includes a dramatic glass angle that spans both floors of the building. It is impossible, at first glance, not to notice such a detail.

Completely redesigned but without changing its identity, the old country house has been redesigned to combine modernity and tradition. And the result is simply spectacular, since the huge window is not only beautiful to look at, but is also able to provide fascinating natural light and reflect the natural elements around it.

It almost feels like the traditional stone building hides a glass “second skin” , don’t you think?

This architectural project is certainly an example of how contemporaneity can be perfectly integrated with what already exists, for an extraordinary result.

What do you think of this renovation? Have you seen this build before?