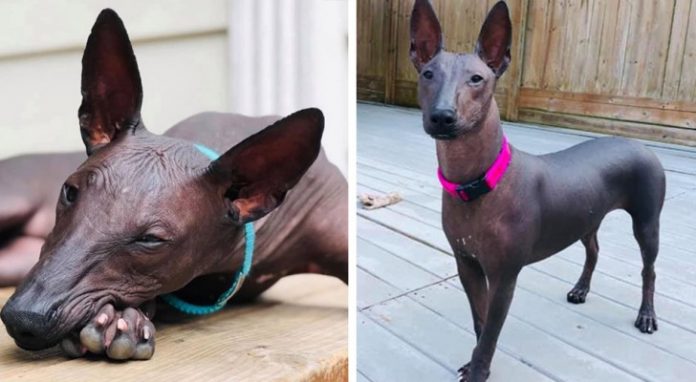 Not everyone likes hairless dogs or cats – in general, when you think of the ideal pooch, you imagine a furball a few months old, sympathetic at first glance. But when you look at a Sphynx cat, you don’t feel the same kind of empathy, unless you’re a fan of that breed of cat, of course. The same goes for dogs, because not everyone likes Peruvian hairless dogs, for example. But  Wendy Scarborough has an obvious passion for Viringo dogs, so much so that she bought one for the “small” sum of $ 2,500 !

Much like the Sphynx cat, which looks a lot like an ancient Egyptian statue, the Peruvian hairless dog looks a lot like an ancient statue. Despite her stately and important appearance, Fable’s mistress Wendy Scarborough admitted her dog is anything but serious. Although he resembles a sphinx, he is a dog full of vitality and very expressive once you get used to his company.

When taking her Fable for a walk, Wendy receives many comments about her dog’s appearance, saying that she looks like a living statue. Unlike the Sphynx cat, which was created by human hands in the 1960s in Canada, Fable belongs to a very old breed of dog. Wendy claims that during her walks she is stopped at least 5 times by curious people who absolutely want to understand what breed he belongs to and what his origins are.

The behavior of these dogs is generally a little different from the usual: they are a little shy and tend to be on their guard; if they come across strangers or other dogs on their walk, they tend to stare at them insistently, which further accentuates their solemn and statuary appearance.