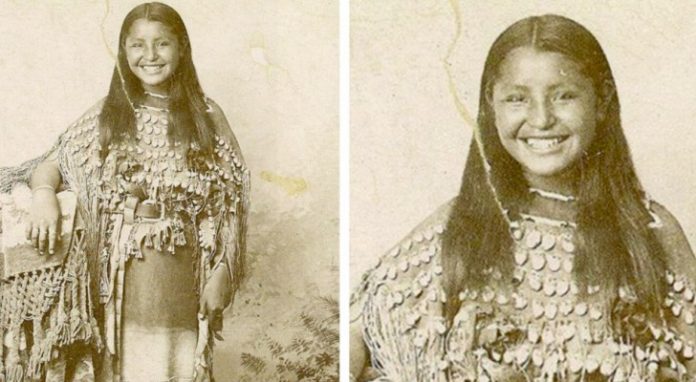 Before the era of traditional photography, the machines for making them, and the study of lenses, there was the daguerreotype, a practice extremely widespread at the end of the 19th century throughout the world, especially on the American continent and in Europe. This is why a very rare photograph accidentally found in a private collection and taken in 1894 is of even greater value; especially if the photograph in question represents a young Native American woman with a dazzling smile .

The photograph in question was discovered in 2019 in the private collection of George W. Brentz and was subsequently purchased by the Smithsonian Institute after a very large auction. The photo taken in 1894 shows the young Ooo-dee of the indigenous Kiowa people with a smile that was very rare at the time of the first photographs. In fact, most photographic portraits had semi-serious subjects or very neutral faces: the long exposure time in front of the lens made it impossible to maintain a full smile for long, preferring the static poses typical of painted portraits.

This is why the photographic portrait of the young Oo-dee differs from this tradition; her traditional deerskin dress adorned with elk bone honors her native roots and shows the craftsmanship of the Kiowa tribe; as you can admire, her smile is sparkling and unique for its time. What makes this photograph even more special is that it documents a person from a group whose stories have long been lost in history. Indigenous women, unfortunately, continue to have little presence in the historical narrative, and their voices have often been stifled by those of the more powerful communities around them.

But with this priceless portrait photograph, the Kiowa Tribe continues to persevere and exist in historical memory thanks to Oo-dee’s dazzling smile.