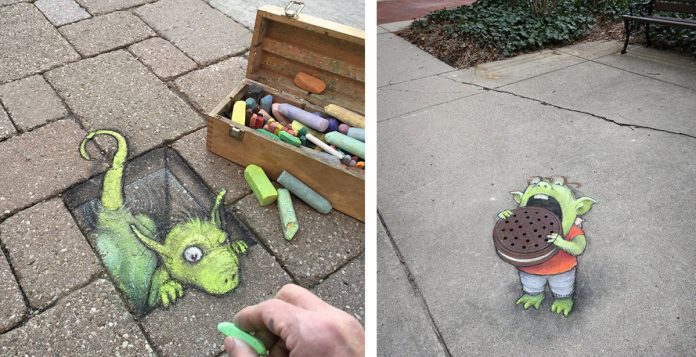 2020 is not going to give us a break anytime soon with the pandemic still raging around the country. We all need something to brighten up our days than ever before. It could be anything by seeing something beautiful and heartwarming on the internet. A chalk artist from Ann Arbor, Michigan is been documenting his newly-created creatures all over the city. He’s busier than ever these days. He updates some images to social media that bring smiles to people all over the world for a while now. There are also some lucky residents who can get to see this amazing art in person.

Zinn is a self-taught artist. He created a green semi-subterranean resident named “Sluggo” and started drawing him on Ann Arbor’s streets and he has been decorating the streets of Ann Arbor since 2008. Sluggo was on a sidewalk at first and he’s been peaking out of cracks in walls, chilling out on ledges, and just doing all of his daily activities around town since then. Zinn created Sluggo using simple colored chalks. Zinn uses art as a tool for solving problems and he is a self-described “inveterate doodler and a shameless word nerd”, even if the problem is just a sad crack in the street.

Zinn was a designer, theatrical performer and director with the University of Michigan Gilbert and Sullivan Society for 21 years. Zinn has a huge social media following with more than 380,000 followers on Instagram. He is also a writer his book is available for purchase on Amazon. Zinn makes it a practice to improvise on location while “simultaneously sneaking pointless sidewalk art into the world at large.” He is also clever in scenic painting and creative writing courses and has also performed in several operas. He has also hosted children’s radio shows and recorded audiobooks.

Here are some more of his work below.