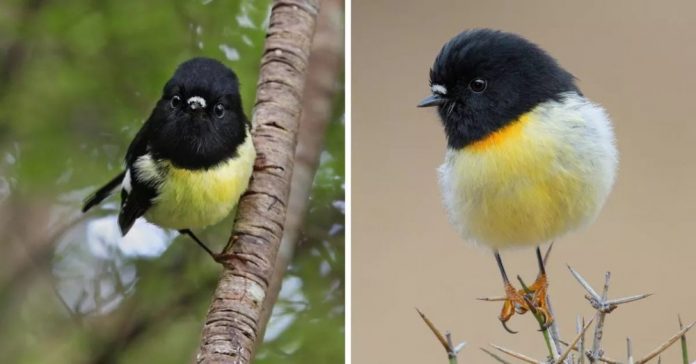 The Tomtit Fits Perfectly Into The Australasian Robins Family With A Large Head, Tiny Beak, And A Round, Puffed-Out Little Body.

These birds can be found only on the islands of New Zealand. Their name: “tomtit”, short for “tom titmouse”, dates back to the 16th century as a word used to describe a small animal or object.

Tomtits (Petroica macrocephala) take invertebrates, such as caterpillars, spiders, moths, and giant, rodent-sized insects called weta. These birds are related to New Zealand’s Chatham Island black robin (P. traversi), and the two are believed to have evolved from an ancestor that flew from Australia.

Tomtits are a common bird of native forests, plantation forests, and they are even scrubland throughout the country. It is very common to see one of these distinctly colored black and white birds on a branch. You can hear them more than see them. They have a sound like a squeaky wheel on a wheelbarrow.

The black robin is endangered and was only recently pulled back from the brink of extinction while the tomtit has managed to adapt quickly to the changing environment of New Zealand.

The black robins have come back thanks to the tomtits. Tomtits acted as unwitting foster parents for the eggs of a very special black robin, Old Blue.

On the North Island of New Zealand, there’s the North Island tomtit (P. m. toitoi), with a lovely white chest, which can be found and the tiny adjacent islands, Hen and Chickens, Little Barrier, Great Barrier, and Kapiti:

These birds eat a variety of insects such as spiders, beetles, flies, moths, and even wetas. They find food from the ground up to the canopy. They sit perched on a branch or trunk and scan the surrounding area and fly off to eat something or to relocate to a new perch.

Tomtits are dimorphic. The males and females have physical differences, such as size or coloring. Male North Island birds are a unique black and white color while the female North Island subspecies are a much duller, drab greyish/brown color.

This Is A North Island Tomtit Looking Absolutely Adorable In The Taranaki National Park On The West Coast Of The North Island: