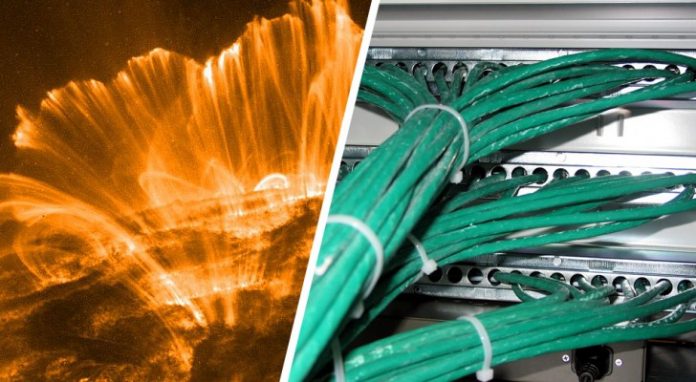 Can you imagine life without the internet? In today’s world, where the web has become an integral part of everyday life, such a scenario would be almost impossible. There is so much we do on the internet and so much content passing through it that if something went wrong there would be problems.

Serious problems, like those that our planet could know according to the study that we are going to discuss. According to research, some sort of “web apocalypse” is not at all unlikely, and could occur in exceptional circumstances, but not impossible. What are we talking about? A particularly intense solar storm, so strong that it could cause a real blackout of web communications, with catastrophic effects on our current way of life, to say the least.

Sadly, this is not an apocalyptic hype. Researchers at the University of California Irvine have indeed hypothesized such a scenario, caused by a strong and unexpected solar storm that could affect our planet in the next ten years.

What we commonly call “solar storms” are, in scientific jargon, coronal mass ejections. When they occur, the sun floods our planet with magnetized particles, which are part of the solar wind. If their magnitude is contained, Earth’s magnetic shield can protect us, but every now and then these events escalate, with effects never before seen in modern times.

According to scientific forecasts, the period of maximum solar activity is set for 2025, a possibility for which we must prepare. What does the internet have to do with it? Quite simply, such an intense and extreme event has never happened in the web age, and the infrastructure that allows the web to connect us to the world could be in jeopardy.

The submarine cable connecting nations and continents is equipped with repeaters to boost the signal, and these devices are particularly sensitive to geomagnetic currents. This is why, in exceptional circumstances, they can go offline, leading with them to huge web outages .

The last such intense solar events were recorded in 1859 and 1921, years when humanity was certainly not as dependent on the internet as it is today. Hence the concern of the scientific world. “The potential impacts of a massive geomagnetic storm on today’s infrastructure are largely unstudied and unaddressed,” said Abu Jyothi, a researcher who contributed to the study. “It is difficult to predict how long it will take to repair submarine cables and repeaters, but Internet outages of several weeks or months are likely .”

It is not difficult to imagine the consequences of such a situation, both in terms of communication and, above all, of economic impact. It is better not to find out concretely what could happen and, according to scientists, to prepare in good time for this far from unlikely eventuality. History teaches us that prevention is better than cure, and we can only trust the foresight of human beings, as well as the “mercy” of a possible solar storm.