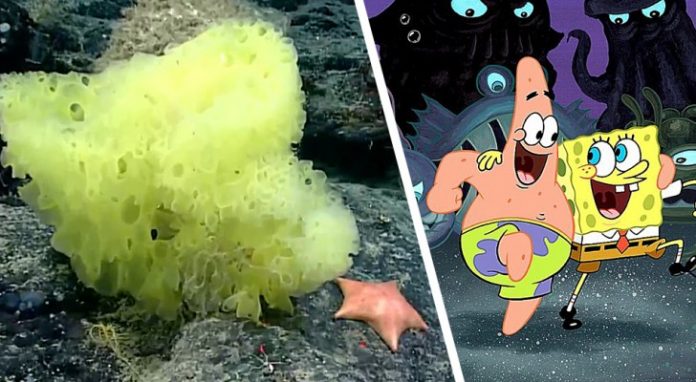 Nature knows amaze us with special effects if it sometimes seems to want to tell us something or, as in the case of the photo which we will talk, we make a joke rather funny.

Do you know SpongeBob, the main character of the homonymous animated series, famous all over the world for his adventures and his fun aspect? Have you ever wondered what this yellow sea sponge could look like in the real world ? Well know that the shot in question is ready to give you a “real” image of the character, and not just him. In the photo, there is also his best friend Patrick Etoile !

The photo showing SpongeBob SquarePants and Patrick in the real world surprised even its authors. Who are they ? A group of marine scientists from the National Oceanic and Atmospheric Administration (NOAA) , the US federal agency that deals with oceans, climate and weather. While exploring the seabed and aquatic habitats in the depths of the Atlantic Ocean using a remote-controlled vehicle, a scene immediately caught the attention of experts.

A yellow sponge ( Hertwigia ) and a pink starfish ( Chondraster ) lay quietly on underwater rocks. Impossible, at that moment, not to make a parallel with the famous cartoon characters. SpongeBob SquarePants and his friend Patrick Etoile were there, more real than ever! Even if they weren’t wearing any pants or other clothes, it must be said that the image surprises and makes you smile at the same time.

Needless to say, the snap immediately hit social media, where it quickly went public. The first to share it, on Twitter, was NOAA marine scientist Christopher Mah. “Normally I avoid those kinds of references, he commented,” but wow, SpongeBob and Patrick in real life ! “

It was impossible for him and for everyone who saw the photo not to make a comparison with the cartoon characters. “As a starfish biologist, I know that most of Patrick and SpongeBob’s representations are not correct.” These two animals immortalized in the depths of the Atlantic, however, seem to be the “counterparts” in real life of the sponge and its friend.

Take a good look at the sponge: besides being bright yellow, it’s even square like Bob. Not to mention the pink color of the star, very faithful to the cartoon … In reality, these two creatures were not reunited for friendly reasons. On the contrary: sea ​​sponges are one of the favorite foods of the stars, so “Bob” was probably the prey of “Patrick”. It is truly amazing how fascinating the life that lurks under our oceans is. Who knows if there are no other imaginary but real characters in the depths!