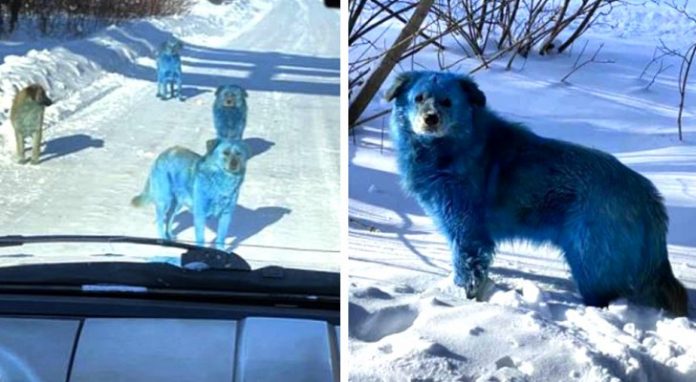 Sometimes the reality of certain episodes that occur is beyond imagination, making us think, even in a rather bitter way, about the damage that man and his activities can cause to nature. We can only sum up what happened near the Russian city of Dzerzhinsk, a center about 400 km east of the capital Moscow.

Several locals have come across groups of stray dogs with a peculiarity that jumped out at them. The animals’ fur was a bright blue, which is why they shared some photos taken of the dogs and alerted local authorities. The story quickly went around the world, and it’s not hard to see why.

Although they look like something out of a sci-fi movie, these blue stray dogs appear to be quite real. Since their photos began circulating, some have questioned their veracity, but expert checks have confirmed the unusual sighting. The animals were photographed near an old abandoned factory, whose origins date back to the times of the USSR and whose operation continued until 2015.

In Dzerzhinskoye Orgsteklo, besides many chemicals, plexiglass was also produced. It’s still unclear how the dogs got this bright color, but one thing seems certain: the poor animals came into contact with residue from the disused chemical plant .

According to Andre Mislivets , head of the structure, the stray dogs may have found copper sulfate while walking around abandoned buildings. A thesis was then confirmed by the authorities who shed light on the incident, which have just described the situation as the result of chemicals not eliminated in which the dogs would have rolled.

It is certainly astonishing that after years, in a place potentially accessible to all, substances capable of reducing these poor animals to such a state have remained. The episode is the subject of an investigation by the police , who also gather the dogs to direct them to specific health checks. It only remains to hope that this mishap will not cause them anything serious.