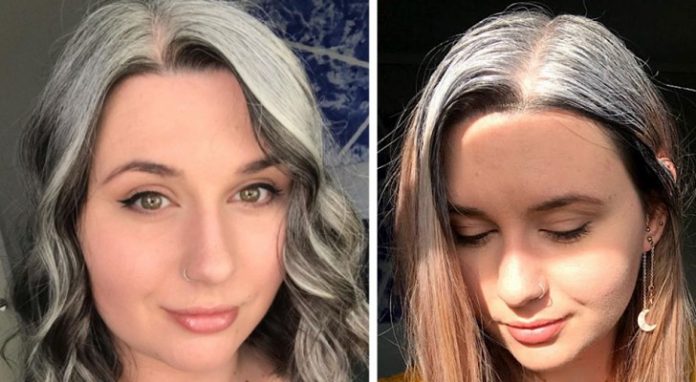 For many women, the appearance of gray hair can be a real problem.  Many people cover them with coloring to hide them, but others  don’t think so.

This is what this young woman of 27 years proves. Her name is Sophie McGrath, and at 13 she already had her first silver strand. After years of coloring, when she turned 25, she realized her hair had turned completely gray. That’s when the New Zealander decided she was going to change everything, and stop hiding something that is just natural.

From dark brown to gray: for Sophie, it didn’t take long for her hair to accomplish this transformation.  Instead of making it a problem or fixing it, the young girl decided to fully adopt her natural appearance.  So, although at a young age this is not common, she proudly sports her silver hair, which at 25 no longer had any trace of her original brown.

For her, gray hair is not a sign of old age or neglect.  On the contrary: they are one more reason to stand out and tell stories of determination and non-conformism.  That’s why Sophie shared with the world what she had done, giving up coloring and accepting herself for who she is .

Instead of making her hair a cause for loss of self-esteem, Sophie thought, after ten years of coloring and hairdressing, that it was time to welcome it without hiding it .  And it was this decision that gave him new self-confidence.

“I felt I had to hide something natural and thought about it constantly, my hair to be colored was causing me more stress than the gray hair itself.”  With the dye out of the way, “I’ve never felt so sure as I do now, I show off my gray hair with pride .”  A pride so strong that Sophie decided to keep her natural hair color even on the occasion of her wedding.

Although it’s not every day you see a bride with white hair, this is how she introduced herself to her wedding.  “It was then that I realized that I was no longer ashamed of my silver hair, I never imagined it could have such a positive impact on my life,” she said. Again.  Like many other women, Sophie has become a true source of inspiration for those who firmly believe that we can go beyond certain standards of beauty , welcoming what nature has in store for us.

And what do you think? Would you make such a choice?