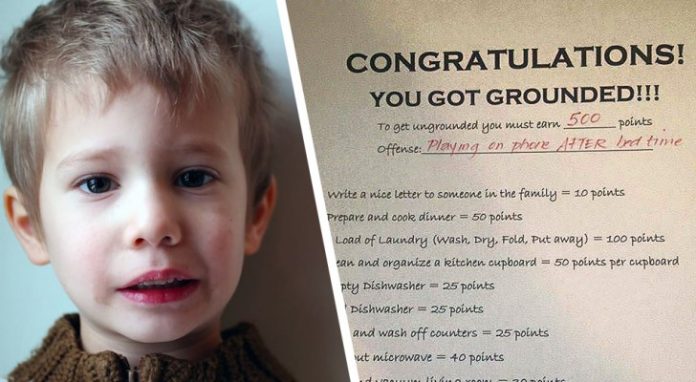 Raising and educating children is not easy, as many parents know. Besides the beautiful and memorable moments, daily family life is also made up of challenges, compromises, anger and arguments, and no adult is born already trained in how to deal with children.

There are many approaches to solving problems and making them understand the importance of rules, some more severe, others – like the one adopted by the mother that we are going to talk about – more articulate and reasoned. What did this woman do that was so special? When she found out that her son had broken one of her rules, instead of giving him orders, scolding him, or getting angry, she opted for a much more educational and constructive punishment.

When the child was caught red-handed by his mother using the cell phone after lying down, the woman could have scolded him harshly, or not. She, therefore, opted for the second solution. No shouts, no threats, but a very educational lesson, the result of very precise reasoning.

Impose punishment and, at the same time, empowerment. With this in mind, the mother made a list of tasks to be accomplished at home and in the family, each with a corresponding score.

” Congratulations, you are punished!, Can we read on the sheet, to cancel it, you will have to gain 500 points because you played with your phone after lying down.” How to earn them? It’s simple: by doing the good deeds listed in the list. Depending on the “effort” and the importance of each of them, the little one wins points, and in the list written by his mother, nothing is missing.

If, for example, he made dinner, he gets 50 points, for the washing machine 100 points, for loading or emptying the dishwasher 50 points, for washing the windows or watering the plants 10 points, as well as for going out of the rubbish bins. Cleaning the bathroom, sweeping the floor, and vacuuming represent 50, 25, and 30 points, respectively. And the list is long.

In short: a really different method to make a child understand the nature of his mistake, make him think, and empower him to participate in household chores. After sharing her particular list, the mother in question became very well known on the web, where she received many rave reviews from netizens.

What do you think? Do you agree with the method she chose to adopt? Is it more or less educational than a traditional punishment?