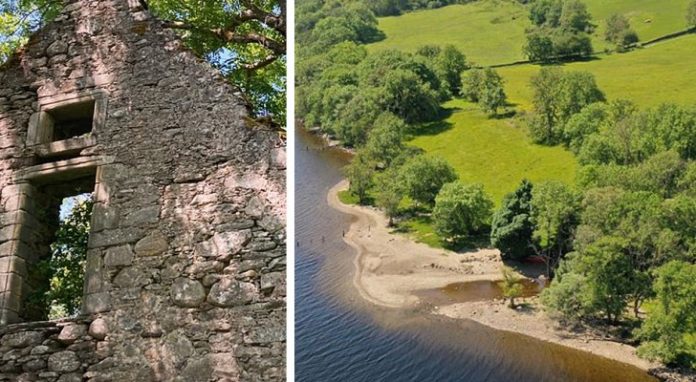 If for many people it is not easy to think of buying a new house , imagine the sum necessary to buy … an entire village ! And yet, it would seem that this is a feasible choice after all, and not only in economic terms. And even, it would be a rather attractive village, located in the beautiful Scottish Highlands, on the edge of a charming lake and with its own private beach.

Can you imagine that such a place sells for around 146,000 € ? But just know that if you believe in ghosts, this purchase might not be for you.

In many European cities – and not only in Europe – for 146,000 euros you can buy medium-sized or even rather small accommodation, certainly not an entire village. And yet the 1.33-hectare ancient village of Lawers, situated on the shores of Loch Tay, is simply breathtaking .

Lawers nowadays is a ruined place that has long gone unpopulated. One story, however, made him very famous, that of the Lady of Lawers . According to legend, this woman, who lived in the second half of the 17th century, was a fortune teller, particularly dedicated and skilled in making prophecies of all kinds. Respected by the locals, she was feared at the same time, because her words often came true.

In particular, one of her prophecies relates to an ash tree that she planted near the old church, saying that anyone who damaged it would meet with doom. According to locals, a farmer shot him down in the 19th century, and from that point on he was struck by a series of unfortunate events that led to his demise.

And it is precisely the Lady of Lawers – or rather her ghost – who, according to local legends, still “haunts” the old village , desolate and in ruins but enveloped in a very particular cachet. The private beach by the lake, a small wood, the old buildings: everything here seems to have stopped in time and reflects the characteristics of a perfect Scottish village, between history, legends and nature .

Already sold in 2016, it is back on the market, and Goldcrest, the agency handling the mandate, said the proposal has generated considerable interest, with many requests to purchase.

Of course, whoever gets this place will have to contend with the ghost who for many is the true owner of Lawers, but this place is certainly as unique as it is appealing.

Would you be ready to buy this mysterious little piece of Scotland?