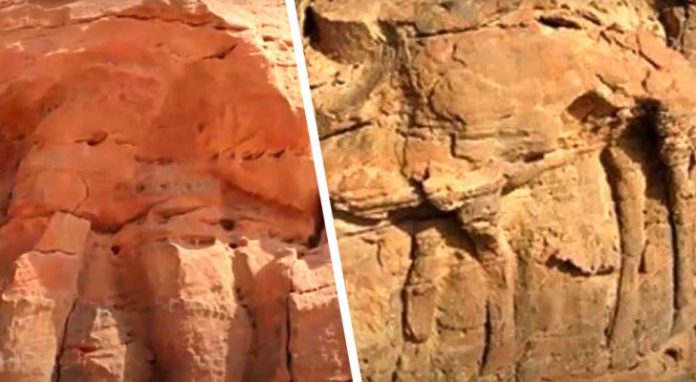 These incredible rock carvings are older than the Pyramids of Giza and are proof that a rich Bedouin civilization existed in Saudi Arabia in very ancient times. The archaeological site, nicknamed ” Camel Site “, dates back 8,000 years, when man began to develop agriculture.

The discovery, made in the Al-Jawf region, has already become a point of attraction for tourists who love archeology. This is perhaps a first step towards writing a new chapter in our oldest history.

Maria Gauguin , an archaeologist at the Max Planck Institute, can only smile with satisfaction. The discovery made by his team in the Al-Jawf region of northern Saudi Arabia is astounding.

“It’s a dozen camels carved in the rock,” she said, “gigantic in size and visible from several meters away.” Unfortunately, they are only part of a large bas-relief sculpture that was supposed to cover the entire rock face. Besides the camels, one can still see two other animals – probably donkeys or horses – which gives an idea of ​​the richness of the whole mural.

“Do not forget that at that time, 8,000 years ago, continues Maria Guagnin, the Neolithic revolution began in many regions, making humanity pass from nomadism to sedentarization. Knowing that it existed in this region. a society so advanced that it was capable of creating artistic works of this size could make us rewrite certain pages of human history. “

Noticing the colossal size of the carvings inside the stone, one can easily wonder why such a work was done at this precise location.

“It is very likely that the nomadic peoples lived in organizations scattered across the territory and far from each other,” replies the archaeologist. “It is therefore possible that they would meet for trade and commerce in certain towns, or markets. These centers – at that time – must have been so prosperous that they could afford urban decoration and propitiatory temples .”

It is not surprising that specialists in the field are enthusiastic about this important cultural discovery. The local government immediately seized the opportunity to develop this site for tourism purposes . An agreement has been reached between the Saudi Fund for Tourism and a number of major tour operators to make this site accessible to the international tourist flow.

It is planned to develop an area of ​​50,000 square meters , with a luxury complex of 200 apartments, restaurants, shops and facilities for outdoor activities. The project will not be completed for two years. In the meantime, it is interesting to gather information and study these fascinating civilizations of the past and, why not, organize a cultural trip as soon as the work is finished!