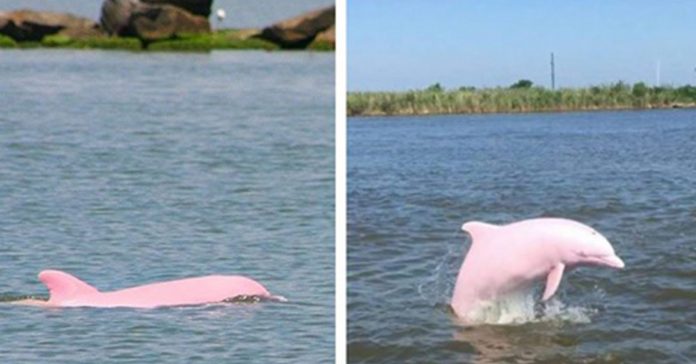 It’s unbelievable that dolphins could be completely pink. Some of the sweetest and friendliest animals in nature are Dolphins. We all have read stories of dolphins rescuing drowning sailors in turbulent seas. Dolphins make people feel positive emotions of love and light. This pink-colored mama and her baby are the same.

In 2007, the albino bottle-nose dolphin named Pinky became famous when she was captured swimming with her mother, a dark-colored dolphin. Captain Erik Rue captured her the first time. He continued to see her recurrently following that appearance. Pinky was marked among other dolphins due to her unusual candy-floss color. She’s also been described as “very sexually active.”

Pinky’s skin color is due to a mutation that affects the albinism, genes that are responsible for melanin production. Her parents had typical black-color, but each carried a single copy of the mutated gene; so that Pinky has a unique color. Pinky is one of the few albino animals thriving unaided in the wild according to Greg Barsh, a geneticist who studies color variations. Most of them are kept in laboratories to protect them due to the conditions that occur from albinism such as skin sensitivity and poor vision. They are not as adaptable as albino humans.

As pink as her mother

Thomas Adams posted a photo in 2017 on Facebook which showed a clip of Pinky in the Calcasieu River in Louisiana. This time, she’s not alone. She was swimming with another pink calf and believed to be her own baby.

The appearance of Pinky’s calf with the same 100% pink coloration proves that dolphin albinism is genetic and can be passed down from parent to child. Even though Pinky most likely mated with a male who was typically dark-colored, her calf turned out to look exactly like her. We hope that there’ll be more adorable albino dolphins out there in the future.

Mr. Rue said to KATC, “Surprisingly, it does not appear to be drastically affected by the environment or sunlight as might be expected considering its condition, although it tends to remain below the surface a little more than the others in the pod.”

He added: “I feel very fortunate to have seen this incredible mammal and lucky to be able to work and live in the area where such a fantastic creature frequents. Our guests are always thrilled at the opportunity to spot such a unique mammal and we look forward to it being around for some time to come.”

The statistics of albino dolphins out in the wild are less known, but they are believed to be very rare and possibly endangered. Pinky has been severally misreported to be an Amazon River Dolphin. A species of toothed whales also known as the Pink River Dolphin which can be found mostly in South America’s waters. They have pinkish-grey colorations on some parts of their bodies, mostly their bellies, tails, and fins. The IUCN classified this species as “endangered to vulnerable” with only a few tens of thousands left in the wild. But they are not albinos as their color is unique to the entire species. They are in gray color as young dolphins and become pink as they approach adulthood. There are also some cases that the entire body of the dolphin transforms into the new color with tiny patches of grey.