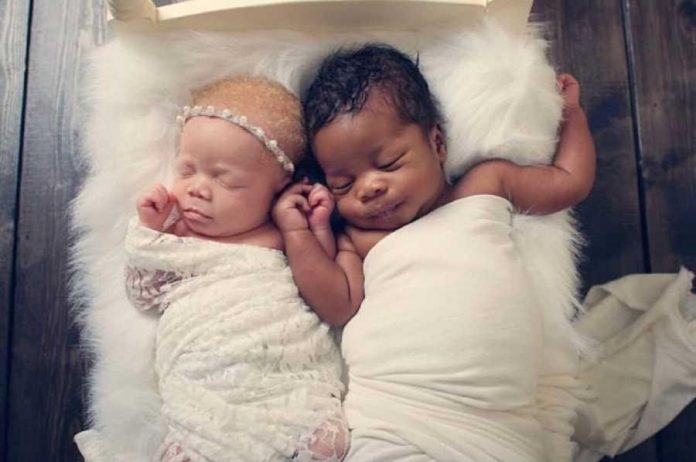 Judith Nwokocha, a Nigerian-Canadian photographer gave birth to twins. When she first saw her albino twins, she thought the nurses had handed her the wrong baby.

The 38-year-old photographer is based in Calgary, Alberta, Canada. She had been trying to conceive for eight years with her African husband. Finally, they got the most adorable set of twins through IVF. Now the kids are four years old and people have a hard time believing the children are twins because of their different skin colors. The boy, who is named Kamsi, is dark-skinned and the girl is while, Kachi, was diagnosed with albinism a few days after her birth. The twins are uniquely adorable and thankfully, they don’t see any color differences and are growing up as best friends just like all other babies born out there.

Judith explained, “The second scan revealed we’re having twins; I was told the twins might have Down syndrome.  At seven weeks Kachi was always behind, was very small, she stopped growing, I remember the doctors telling me she might not make it — I’m so grateful she did. She didn’t cry initially so I was thinking what’s going to happen, how is she going to be? I was shocked. I thought they had handed me somebody else’s baby, I didn’t believe she was mine.”

Albino twins: A rarity as beautiful as any other

Judith admitted she’d been shocked that her baby girl was born an albino because her family didn’t have any history of the condition in an essay written by Judith for Love What Matters. She was worried about the girl’s future and the way she would deal in an often discriminatory society.

Judith wrote, “I loved my princess like every mother would love her baby but worried about her condition. Gradually, worry turned to sadness and I started questioning God, wondering why He would put me in such a situation. I worried about her future, how society would treat her, how she’ll be accepted, etc. I envied other black babies and thought, ‘Why me? Why was I the one to have an albino baby?’ How did I get black and white twins?”

According to Judith, her husband had also been in denial at first when they learned of the baby girl’s condition, but, they later decided to attend counseling. They never got worried and fear until their babies turned one. Judith has finally begun to see the beauty in her baby girl’s condition, “her gold hair, her brown eyes, her pink lips, and everything about her.” When she noticed how everyone always admired the lovely girl wherever she went, her fear eased. They would often swoon at the sight of her stunning beauty and she’s always the center of positive attention.

Kachi is a perfectly healthy little girl with a bustling personality and a strong will, aside from sensitive skin and eyesight. Judith is using her skills as a professional photographer to showcase the beauty of having twins with dramatically different skin tones. They are perfect in every way. Kachi’s charming brother, Kamsi, loves and adores her from their photos.

“I always tell her how beautiful she is because she really is. I wouldn’t trade her condition for a million dollars because she’s perfect to me in every way. Albinism may have its challenges but I’m teaching her to be strong and conquer whatever may come her way. I’m showcasing the beauty in albinism by constantly taking pictures of her and twin brother. I’m not sure she`s aware of her uniqueness at the moment, but eventually, she’ll know, and it’s my responsibility to educate her and teach her to love herself no matter what.”

An inherited congenital condition characterized by the absence of pigment (melanin) in the skin, hair, and/or eyes is called the Albinism. This can occur when there is a defect in one of the genes that control the production of melanin in the body. Kachi was born with a type of oculocutaneous albinism (OCA). It is the more common of the two forms of the conditions where the skin, hair, and eyes are totally without pigment. The other form, ocular albinism, primarily affects the eyes.

One in 20,000 babies around the world is born with oculocutaneous albinism. They usually experience a range of eye conditions, decreased vision sharpness and strabismus, sensitivity of the skin to light, and increased risk of cancer.

Albinism is common across Africa and quite rare in the rest of the world. Albinism is believed to be a result of consanguinity, the inheritance of identical genes by descent. Albinos are still ignorantly stigmatized, ridiculed, and sometimes abused or even hunted due to countless superstitious myths, and legends about their condition in many parts of Africa, even in this modern-day.  They are also the objects of intra-racial skin tone discrimination where people from their own races question their true identities.

Albinism should be regarded as a point of uniqueness such as blue eyes or red hair. It’s really not fair to discriminate anyone against anything, especially not a congenital condition they didn’t choose, one that’s actually really beautiful. The myths, legends, and superstitions are completely wrong and should never be taken seriously. They should be also treated equally and with dignity as stakeholders in society.