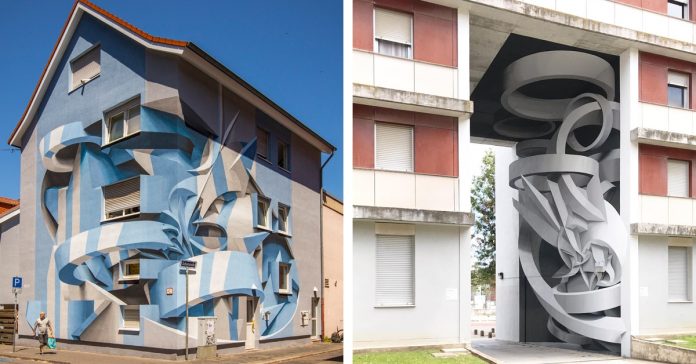 The Italian graffiti artist has done a mural project for the 2019. He painted the geometrical design on a street corner in Mannheim.

A residential house in the German city of Manheim has transformed into a deceiving ‘anamorphic’ mural by Peeta. The artwork was done to Stadt Wand Kunst Street Art Festival and consists into a series of ribbons and geometrical designs that break the architecture of the building without betraying its original nature.

Graffiti drawings aim to communicate with the people through the conveyance of relevant messages by means of art regardless of the form. Peeta creates 3D-looking abstract drawings on his mural compositions in order to create a unique kind of visual rhythm.

In 1993, Peeta started his career as a graffiti artist. His first creation was done on his neighbor’s small wall fencing. Since then he decided to pursue his passion for graffiti. He later became a member of the most-renowned teams of graffiti artists including EAD Crew (Padova, Italy) and RWK Crew (New York City). He has participated in many art shows and festivals all around the world. This gave him the opportunity to showcase his impressive 3D-looking abstract murals.

Airbrush was his equipment to paint on walls. Later he decided to permanently substitute it with acrylic paint, brushes, and rolls. It usually takes him 15-20 days to complete a large scale mural project depending on the scale of the façade. He has transformed many buildings into incredible three-dimensional art pieces over the years. This abstract mural on a building in Mannheim, Germany featuring tones of blue, white, and gray is his latest creation.

These Are Some Of His Equally-Stunning Mural Compositions Featuring 3D-Looking Abstract Drawings:

Peet’s Trompe l ‘œils style, emerging from the Italian graffiti scene during the 1990s is well known around the world. His work explores the potential of sculptural lettering and anamorphism, both in painting and in sculpture.

The stadt.wand.kunst project invites street artists to mannheim every summer which is now in its seventh year according to culture blog montana-cans. The national newcomers, international stars or emerging regional artists, spend months preparing a new mural to add to the district.

According what Peeta said he started painting and studying art in the early 1990s, while he had a love for sculpting from a young age.

“Enjoying sculpture from a young age gave me insight on how to design things with clay and making sculptures with marble,” he said. “My way of understanding shapes and designs that I use in my murals now largely comes from my work with sculpting.”

Peeta’s painted shapes and shadows on this wall of a hotel in Barcelona, Spain, blend with the surrounding balconies and walls.

You can see how the shapes appear to move off the surface.

Peeta draws inspiration for his murals from the building’s architecture and surroundings.

Peeta said, “It’s very important to interact with architecture. Interacting with the geometry of the space is fundamental because every space is completely different.”

He said, “By playing with different shapes, shadows, contrast, and colors, I can create something that has movement.”

The three-dimensional effect of Peeta’s murals is a technique called anamorphic painting. It gives the illusion of depth and space where it doesn’t exist.

According to Create, Adobe’s official online magazine, Anamorphic painting is a technique that has existed since the 15th century.

Another example of the technique is illustrated on the Guinness World Records website, which features the world’s largest anamorphic painting. It makes paintings and two-dimensional pieces of art appear to be jumping off a canvas or surface.

There are fluid, rounded shapes that make it hard to believe the wall is completely flat in Peeta’s murals.

He needs large-scale equipment, like cherry pickers and industrial-quality paint for his massive murals.

According to Peeta, his background in sculpting makes his one-of-a-kind murals what they are today.

“I’m not just painting or creating abstract designs. I’m also using a lot of geometry and architecture to think specifically how I can create illusions on each structure.”

Peeta said, “If it’s raining or too hot outside, my murals can be delayed, which is hard. That’s a challenge with outdoor art, but it also makes it exciting.”

He doesn’t want his abstract murals to convey a specific message, but he wants to bring interesting, inspiring art to cities and communities around the world.

“It’s important to have art in places where people may not see it otherwise, and I get to create something that is specific to the site and the environment.”

“With public art, the work is visible whether [people] want it or not. It’s an exciting opportunity for me to create art in places where there’s people everywhere.”