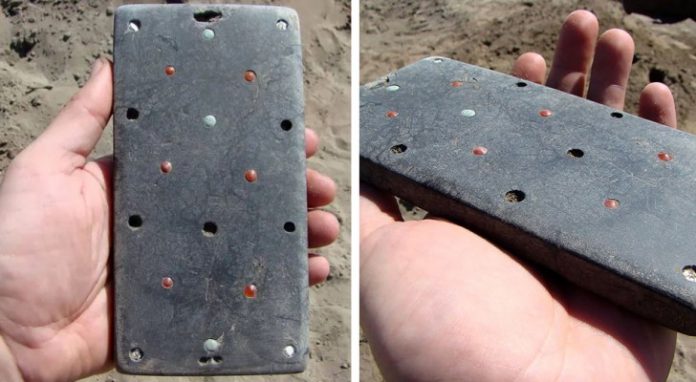 Coming into contact with places and objects from the past is to project oneself into a whole new dimension, fascinating and capable of telling us stories often destined to remain mysterious, obscured by time.

Archaeologists in Siberia certainly know something about this: they were surprised, to say the least, by a discovery that strongly resembles something that we could define as a symbol of modernity and the present. What is it about? It’s simple: a smartphone !

The artifact discovered by a team of archaeologists in a tomb in Siberia resembles the shell of a latest-generation smartphone, to the point that it has been dubbed “the iPhone of 2100 years ago” by researchers themselves. Because this is exactly the age of this mysterious object, unearthed in the burial of a young woman in 2019, and which has since been the subject of intense studies and hypotheses.

Equally intriguing is where this object was found. The tomb of the young woman, nicknamed “Natasha”, lies under a large Siberian reservoir, the Sayan Sea, which is emptied for a short time during the summer. Just below, in a sort of “Atlantis”, are the remains of the young girl and her belongings, including her “iPhone”.

Natasha is said to have lived during the Xiongnu era, in remote parts of Asia, and would have been a rather “fashionable” person for her time and her society. This is evident in the funerary objects of the burial place. The rectangular case-shaped object is adorned with a series of precious stones such as turquoise, carnelian, and mother-of-pearl, which evokes something precious.

The most credible hypothesis is that the “phone” is a belt buckle, worn by women as an accessory around 2,137 years ago , according to dating by experts. “Natasha’s burial with the iPhone,” said archaeologist Pavel Leus, “remains one of the most interesting of this place.

Despite the various assumptions about her life and the artifact, it’s unclear who Natasha was. Some believe that she was a priestess and others that she worked as a weaver of dresses or as a craftsman of precious accessories. It is certain that what we found there, at a depth of more than 17 meters, is a true testimony of the past which has wonderfully returned to the present, in a more unique way.

Have you ever seen this “ancestor” of the iPhone?