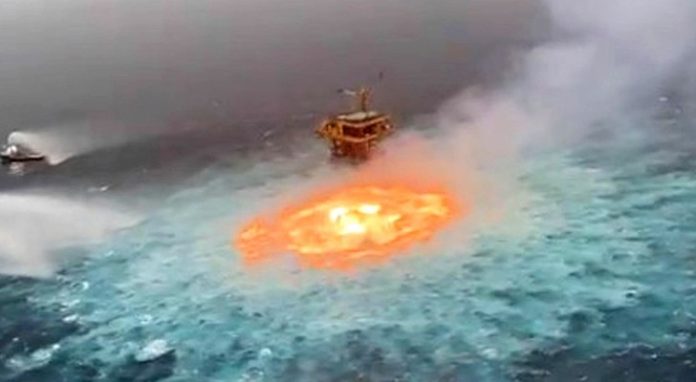 Sometimes we witness such awe-inspiring sights and devastation that the most absurd and apocalyptic scenarios we could think of seem to materialize before our very eyes. We could not describe otherwise what happened in the Gulf of Mexico, west of the Yucatan Peninsula.

Fire in the water: is there anything more incredible and at the same time more frightening? Maybe not, but such a phenomenon has happened for real, right in the waters of the Atlantic Ocean, and once again as a result of human activities. The impressive fire was caused by the rupture of an underwater pipeline located near an offshore oil rig.

The structure is connected to the platform of Pemex (Petroleos Mexicanos, the national company of the South American country). At one point in its journey, obviously, something did not hold, for reasons as yet unknown, and the gas leak gave rise to this singular fire.

Images and videos of the sad episode have been taken around the world, plunging millions of people into a scenario nothing less than disastrous, in which the water of the ocean can be seen burning.

This is not the first time that the Mexican oil company has been at the center of accidents, and the extent of the environmental damage from the leak and the resulting fire is not yet clear. It is certain that once again, man, by his activities and probably by his negligence, has contributed to undermining ecosystems that should be protected and safeguarded.

The fire extinguishing operations lasted more than five hours, during which several emergency vehicles were used to contain the fire. Fortunately, according to Pemex, the incident did not cause any injuries.

Having to put out a fire in the middle of the Gulf of Mexico feels just too difficult to believe and yet pic.twitter.com/8OFNNiKyrj

What happened in the Gulf of Mexico has once again raised controversy, criticism and concerns about the dangers of activities such as oil drilling. “The frightening images from Mexico show the world that drilling is dangerous,” said Miyoko Sakashita , director of the ocean program at the Center for Biological Diversity. “These horrific incidents,” she added, “will continue to damage the Gulf if we do not stop offshore drilling once and for all.”