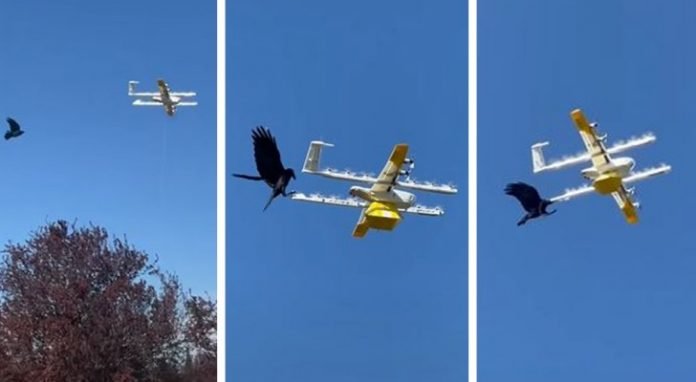 There are times when it feels like nature has had enough of so much technology and unceremoniously decides to step in. We can only think of it, with a touch of irony, when we see what happened to a Google drone in Australia which, to put it simply, was not at all appreciated by the local wildlife.

So much so that, in the face of the attack that we are going to show you, a case that is apparently not isolated, the computer giant was forced, along with Wing, a company that deals with home deliveries by drones, to suspend the service until the situation is clarified. Let’s see in detail what happened.

We are in Canberra, the capital of Australia. This is where the hapless drone immortalized in a viral video by Ben Roberts, a local resident, had the experience to be forgotten. If this object could have feelings, we are sure that it would have had a hell of a fright in these moments …

The drone was in the service of Wing, a food delivery company run by Google. In this specific case, it was Ben Roberts who ordered the coffee, at the risk of not arriving safely. As the vehicle in question was about to arrive at its destination, it was spotted by a crow, who, visibly annoyed by its presence in the Canberra sky, wanted to express its displeasure.

The bird threw itself at the drone, as can be clearly seen in the video posted by the Australian, and did not leave it for several seconds, trying to stop it from flying and knocking it down. An attack that has been repeated several times, and which is certainly not an isolated case.

Crows, magpies, hawks and more are fighting a real battle against Wing and Google’s drones, to the point that companies have been forced to suspend their delivery services. Most likely, birds see drones as a threat to their own safety and that of their nests, and therefore do not hesitate to attack them.

The reports of similar incidents have multiplied, and deliveries by the drone of food and other items such as drugs were thus interrupted, time that experts assess the situation. “It’s only a matter of time before a drone is shot down,” commented Roberts. He was joined by Wing, who said that “birds in the area have territorial behavior on moving objects.”

“We are committed to being environmentally friendly, which is why our expert birders are investigating to ensure that drones have minimal impact on birdlife,” the company said. If we can understand why crows and other birds behave the way they do, such a repeated series of events has never happened before .

“ Ultimately the sky is theirs, we are the visitors, ” said Wayne Condon, chief pilot and drone pilot instructor for UAV Australia. It is difficult to contradict it, and we can only hope that the coexistence of technology and nature can continue to be peaceful.