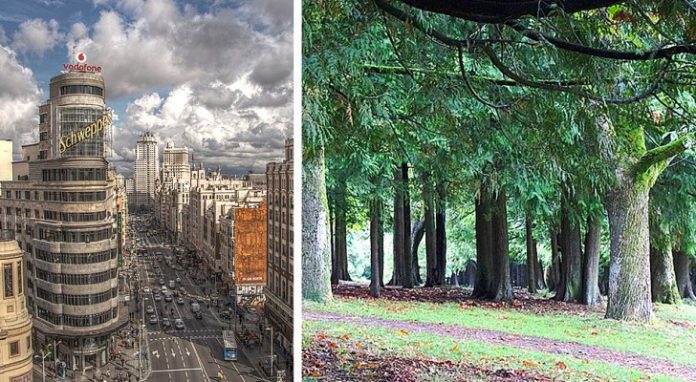 In the midst of so much negative news about the environment and its health, luckily there is a glimmer of hope every now and then. This is what one might think when reading the green project which is in preparation in Madrid and which we are going to tell you about.

The Spanish capital has a specific goal in mind: to lower temperatures and reduce CO2 emissions. To do this, she launched an idea that will hopefully soon become a reality. What is it about? The construction of a huge urban forest, with plans to plant around half a million trees, arranged in a 75 km ring around the city. A real “greenway” that deserves to be discovered and explored.

The heat island effect is a phenomenon that unfortunately the city of Madrid knows only too well. This happens when urban areas adopt a true microclimate that is significantly warmer than surrounding rural areas, due to various interrelated causes. Cementation, vehicle emissions, scarcity of greenery, heating and air conditioning systems, and industry are among the most common.

To fight against all this, and of course, to help the planet, Madrid has decided to change course and to do it in a concrete way. Hence the idea of ​​the green ring made up of thousands and thousands of trees, which will act as a real ” lung “, capable of fighting against the heat island, of absorbing greenhouse gas emissions. greenhouse and create large natural areas stretching from the city to the surrounding suburbs.

It is estimated that when planted trees reach maturity, they should be able to absorb around 175,000 tonnes of CO2 each year . These will be plants that all grow in the wild in central Spain, such as black pines, beeches, Spanish junipers, and oaks. These are all trees that can survive in conditions of aridity and water scarcity, like those in the region where Madrid is located.

“We want to improve the air quality throughout the city – said Mariano Fuentes, environmental adviser of the Iberian capital – and this must be a comprehensive strategy, to create pedestrian zones, environmental corridors, and a new green culture. “

Much more than a simple “park” , then: what is planned in Madrid is a real forest which will change the aspect of the city, making nature and its inhabitants allies as precious as the trees. We can only hope that all of this will be achieved as quickly as possible and that it can serve as a model for many realities outside Spain.