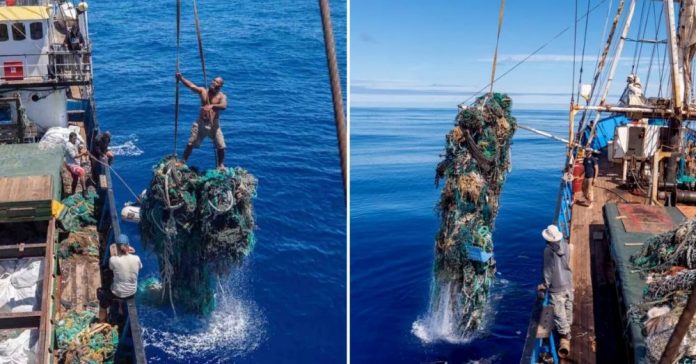 The sailing vessel Kwai in Honolulu found with a record of 103 tons of trash from the Pacific Ocean. The crews were working hard for last month and found a half picking up debris, nets, and plastics from around the world that gather in a place called ‘The Great Pacific Garbage Patch.’

The Ocean Voyages Institute‘s boat docked at the port of Honolulu, Hawaii, after being out for 48 days. They’ve brought back 103 tons (206,000 lbs) of fishing nets and consumer plastic.

The group itself held the record from a 25-day stint last year. This time, they have found more than doubled what they collected back then.

Recently, The Ocean Voyages Institute’s Vessel Came Back After A 48-Day Expedition, Successfully Removing 103 Tons (206,000 Lbs.) Of Trash From The Pacific Ocean

100 million marine animals are killed annually due to this plastic waste and it’s estimated that it will greatly outnumber the fish in the ocean by 2050.

We are losing our oceans which produce half of the world’s oxygen, to our excessive plastic consumption. There are some people who are trying to put a stop to this by cleaning the oceans. .

The Ocean Voyages Institute’s marine plastic recovery vessel came back from a heroic voyage on June 23 after a 48-day expedition. 103 tons (206,000 lbs) of fishing nets and consumer plastics were removed from the Great Pacific garbage patch, also known as the Gyre and Pacific trash vortex.

The latest haul is more than double the one from last summer, which culled 42 tons of debris after 25 days out at sea.

The institute deployed GPS-enabled satellite beacons, drones, and other technology on last year’s expedition in order to better track the debris in the ocean. It plays a key role in more effectively removing it. Based on Crowley’s theory that one tracker leads to other nets, the beacons were kept on nets with the help of crowd-sourced yachts and other commercial vessels.

Mary Crowley, founder and executive director of Ocean Voyages Institute said, “I am so proud of our hard-working crew. We exceeded our goal of capturing 100 tons of toxic consumer plastics and derelict ‘ghost’ nets, and in these challenging times, we are continuing to help restore the health of our ocean, which influences our own health and the health of the planet.”

Crowley wants to launch a larger expedition this year, with more vessels over a three-month period. But, she had to scale back due to the impacts of the pandemic.

Capt. Brad Ives led by the Kwai, nevertheless embarked on the expedition, departing from Hilo on May 4 after a self-imposed quarantine of three weeks.

She said, “We were very careful to keep the crew quarantined, and to test any new crew members coming on board because we wanted to make sure the expedition was safe from a health perspective.”

He believes that the pro-active approach to removing the marine debris in the Gyre, halfway between Hawaii and California will help spare coral reefs and also wildlife, including whales, dolphins, and sea turtles from entanglements.

The successful mission has removed 48 tons (96,000 lbs) during two ocean clean-ups in 2019 thanks to Crowley’s effective methods.

She said, “We feel that our cleanup work in the Gyre really helps address some of this debris before it arrives in the islands. The oceans can’t wait for these nets and debris to break down into microplastics which impair the ocean’s ability to store carbon and toxify the fragile ocean food web.”

The debris was collected with the help of Matson. The large piles of ropes and fishing nets and discarded consumer plastics will be sent to West Coast destinations to be transformed into fuel and repurposed into building insulation.

The nonprofit has also collaborated with the University of Hawaii’s School of Ocean and Earth Science Technology for many years, which will study the physical and biological processes controlling the ecosystem based on the debris collected from the Gyre.

The Kwai was able to collect samples and launch a number of scientific instruments while many research trips were canceled this year.

Crowley is raising funds for another cleaning expedition by the Kwai to the Gyre, which was expected to depart at the end of June, as well as next summer. She wants to organize cleanup expeditions all around the world.

She added, “Right now when the world is dealing with this very difficult time, it seems so important to pay attention to health on all levels. I encourage people to take very good care of themselves right now, to follow all the procedures, to wear a mask, social distancing — all of these things are important. At the same time, we should be paying attention to nature and making sure we keep the planet a healthy place to inhabit.”

The institute’s advisory board member, Sylvia Earle often cites ignorance, rather than overfishing or garbage, as having the most harmful impact on oceans today.

“Most people don’t realize how closely our own health is tied to the health of the ocean. The ocean really produces two out of the three breaths we take. So we need to keep our ocean ecosystem healthy to help us stay healthy and to help the whole planet stay healthy.”

The Pacific Gyre, which is located halfway between Hawaii and California, still remains the largest area with the most plastic even after setting a new record for plastic clean-up this year.

The Ocean Voyages Institute is currently being prepared to upcycle and proper disposal the huge amount of trash that has been recently collected.

Matt Cox, chairman, and CEO said,“In keeping with our commitment to environmental stewardship, Matson has been searching for a way to get involved in cleaning up the Pacific Gyre. We’ve been impressed with the groundbreaking efforts of Ocean Voyages Institute and the progress they’ve made with such a small organization, and we hope our support will help them continue this important work.”