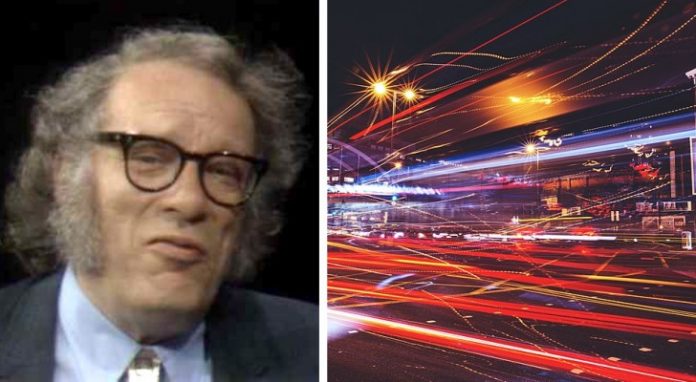 On December 31, 1983, Isaac Asimov, famous writer and scientific divider, inventor of the 3 laws of robotics, was asked a simple question: ” How will the world be in 35 years? “. So Asimov was invited to imagine 2019, using his imagination but also his scientific knowledge. Here’s what he guessed and what’s still a guess.

The first point, most likely, arises from the tensions that existed at the time between the two world powers, the United States and the Soviet Union. Asimov hypothesized a shock that would lead to the annihilation of humanity: if this did not happen, computing and robotization would take over, becoming an essential part of every individual’s life

According to Asimov, robots would have changed our working habits: however, they would not have created unemployment, even if they would have replaced humans in more and more jobs. Based on data already available in the past, Asimov believed that technological progress would have created even more jobs – because new professions would be born – more than those eliminated.

In particular, robots would have replaced us in mechanical and repetitive work, those that do not require reasoning. Humans, on the other hand, would have been responsible for repair, installation, design, and manufacture

Even the school would not have been spared by the process of computerization: the introduction of new technological supports would have modified the traditional method of learning, making it more and more personalized for each pupil. In 2019, the figure of the teacher who transmits data and notions would have disappeared, replaced by a teacher who transmits the curiosity to learn: the computer and other devices would then have facilitated access to final information.

Asimov also imagined that the world would have become faster and faster and therefore not suitable for everyone: some people would find it difficult to keep up with the times, which Asimov calls “inexperienced and unsuitable. “ . In 2019, a natural selection process would have continued to take place, which over time would have selected only the most relevant people, especially those who are able to constantly requalify. The others, in a transition phase, would have remained the responsibility of the company.

Asimov also felt that industrialization would lead to unmanageable waste production. With the irresponsibility of mankind, the natural environment would be turned into a dumping ground, becoming a threat to survival. Asimov hoped, however, that technological inventions would solve the problem, in addition to the awareness of responsibilities to the planet.

Asimov imagined that man would return to the Moon and that in general, he would be more and more interested in conquering extra-terrestrial space. Not only for an expansion of knowledge about the universe but also out of necessity: conquering planets or satellites, like the Moon, would have meant having a new space to transfer industries and other activities, incompatible with terrestrial life: in other words, a new home for humanity.

As Isaac Asimov said, we can read a lot of current facts. However, Asimov believed that the human beings of 2019 would only be a transitional phase: they would soon give way to an evolved human race, the only one who is truly capable of sustaining the mad rhythms of modern society and making it so. an advantage.