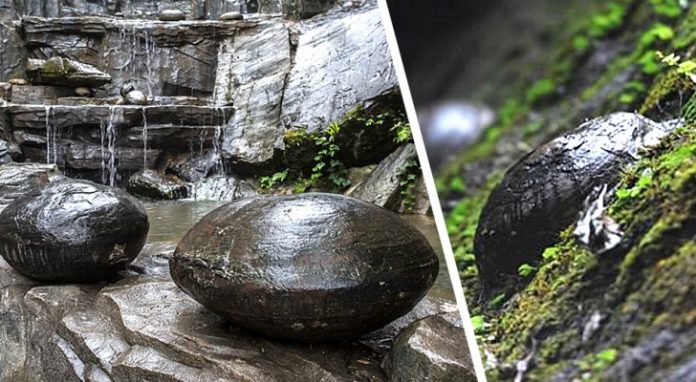 What would you think if we told you about a mountain that … lays stone eggs every 30 years? This is not a joke, an exaggeration or an invention: this place does exist and has long been the subject of analysis by geologists and researchers.

Indeed, although nature has accustomed us to all kinds of wonders, such a phenomenon does not occur every day. Especially since the place where the event itself takes place seems to be part of a legend. Are you ready to take a closer look at these incredible rock “eggs”?

This phenomenon, which seems unique in the world, has for some time aroused curiosity, hypotheses, discussions, and theories of the scientific world. We are in China, in the misty mountains of the province of Guizhou , in the southwest of the country. It is here, at the foot of Mount Gandang , that something very special happens every three decades.

One of the rock walls of this massif seems to “lay” stone eggs. Under the cliff, there is a section of limestone rock from which, every thirty years, the mountain seems to release rock formations with a maximum diameter of 20 to 40 centimeters .

Their shape is unmistakably reminiscent of eggs, and when the phenomenon began to be publicized, the remote place became known everywhere. It is said that in the nearby village of Gulu (an inhabited center of only 20 families), people regard these rock formations (called Chan Ya Da) as good luck charms, so much so that most of the villagers have collected them over the years. time and keep them at home.

Legends and superstitions aside, how can this fascinating phenomenon be explained? Science, despite years of study, has not found a definitive theory. The most widely accepted theory seems to link these rock eggs to the erosion and varying hardness of rocks in the region.

The eggs are not made of the same type of limestone as the cliff they came from. These are concretions formed by deposits of harder and heavier sediments. This is why, under the pressure of erosion, heavy rains, or landslides, the rock face tends to crumble around them.

It is therefore mainly water, by its action, which gives life to these incredible “creatures”. As the rock disappears, the formations that are there are more and more exposed, until they fall to the ground, “given birth” by the mountain.

Mount Gandang isn’t the only place in the world where this happens. A similar phenomenon is also reported in Colorado, USA, but without the pronounced features, it exhibits here in China. Did you know the particularity of this mountain?