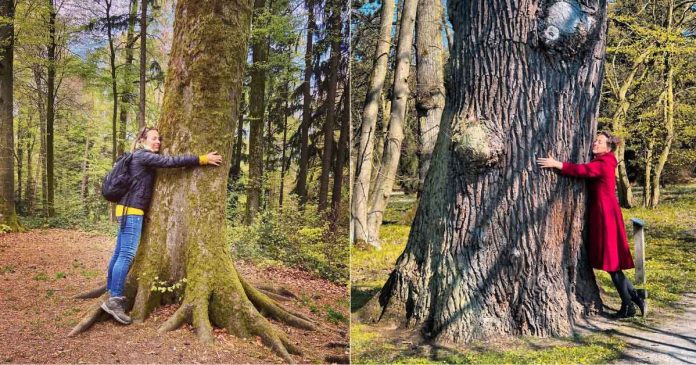 The comfort of human contact has taken away by the coronavirus-enforced social distancing regulations. But according to the Icelandic Forestry Service you can nourish the soul by tree hugging.

Tree hugging had been seen as the domain of the ecologically friendly hippies of the 1960’s and 70’s.

But according to the studies in the last few years, there is indeed a science behind tree hugging. A bonding with a tree can alleviate mental illnesses, depression, Attention Deficit Hyperactivity Disorder (ADHD), reaction times, concentration and even headaches.

Many people are questioning the Western medical establishment as they understand better the benefits of natural or holistic treatments.

The forest rangers at the Hallormsstaður National Forest in east Iceland are trying something in these stressful times with the coronavirus pandemic.

The forest ranger Þór Þorfinnsson , “When you hug [a tree], you feel it first in your toes and then up your legs and into your chest and then up into your head. It’s such a wonderful feeling of relaxation and then you’re ready for a new day and new challenges.”

The rangers worked hard to clear snow-covered tracks. So, the people get the space to wander through the forest and find a tree which they feel attracted to.

Þorfinnsson explained that, the tree can be of any size, and even a five minute hug will be enough to leave one feeling renewed and invigorated.

He also added, “You can also do it many times a day – that wouldn’t hurt. But once a day will definitely do the trick, even for just a few days.”

The quality of the interaction is important than the time you spent with the tree.

Þorfinnsson explained, “It’s also really nice to close your eyes while you’re hugging a tree. I lean my cheek up against the trunk and feel the warmth and the currents flowing from the tree and into me. You can really feel it.”

The History of Tree Hugging

In 1730, a group of around 363 people belonging to the Bishnois branch of Hinduism in India started tree hugging and not the hippies.

The Bishnois protesters tried to stop foresters who decided to chop down trees to build a palace by clinging to the trees.

They were all killed by the foresters. As a royal decree was issued and banning the felling of trees in Bishnoi Village their efforts were not kin vein. Now it’s a wooded oases instead of being a desert landscape.