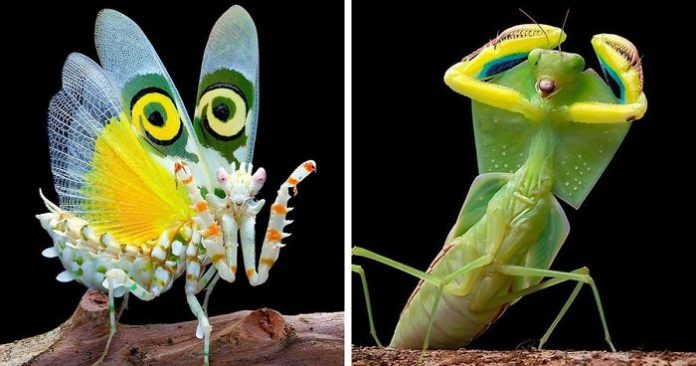 Wildlife photographer Pang Way captures photos very closer. They are little critters that we don’t even recognize and that are so small and we walk without even noticing them.

Mantises or praying mantises like people like to call them is a big and important part of Way’s work. Their prominent front legs, which are bent and held together at an angle that suggests the position of prayer, have given the name for it.

These insects are formidable predators. They have triangular heads poised on a long “neck” or elongated thorax. Mantises have the ability to turn their heads 180 degrees to scan the area with two large compound eyes and three other simple eyes located between them.

Mantises are typically green or brown and well camouflaged in their surroundings. They used to lie in ambush or patiently stalk their quarry. The snare their prey with reflexes so quick with their front legs so that they are difficult to spot with the naked eye. In order to snare prey and pin it in place, their legs are equipped with spikes.

Only few photographers have photographed how stunning these little berserk fellas are. You can enjoy Way’s fascinating pics here.

Mantises target the moths, crickets, grasshoppers, and flies. They will also eat others of their own kind. Adult female will sometimes eats her mate just after—or even during—mating. This ‘fetish’ seems not to deter males from participating in reproduction in their defense.

It’s like a sacrifice they make willingly. According to a 2016 study, they acquire important amino acids that are then incorporated into the eggs they lay when female Chinese mantises consume their mates appearing to lay twice as many eggs after cannibalizing a male than they normally would.

Male’s nutrients give his DNA an elevated chance of getting passed on to the next generation while they would probably like to live and mate with multiple females, at least his death is not in vain.

There’s need of being afraid of their saw-like arms and alien eyes as they pose no threat to those who aren’t insects, geckos, or hummingbirds.

Way told Bored Panda, “I got into wildlife photography out of curiosity. It’s something I have been interested in since I was a child.”

“Mantises are my favorite insects. For me, mantises are the perfect models for macro photography.”

In 2013 Way started taking photos of mantises. He has photographed over 100 species of them until now and has vowed to continue looking for more.

He said that one needs both luck and skill to take a good mantis photo. However, Way has welcomed the challenge. “Mantises may look aggressive but actually they are very gentle and they all look like a professional model.”