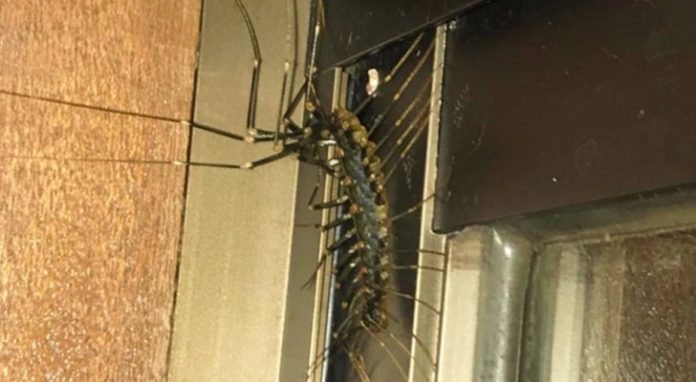 We believe that it is only possible to see such scenes in horror films: the protagonist has misadventures or bad experiences and, with the help of someone, manages to bypass the danger. The man at the center of this story has certainly managed to get around the danger, but not before having had a big fright. On Reddit, a user posted a photo of a guest he found in his apartment. But where in the world was the creature spotted? If you’ve asked yourself this question, the answer is: in Japan .

The user says he walked into his apartment in Japan and encountered this gigantic and frightening creature, which he photographed and shared. It is a Swift Scutigera also known as Scutigera coleoptrata. We’ve all come across centipedes, which are little elongated creatures. But the Swift Scutigère is different in that it is much bigger and much faster. It has 15 pairs of legs and, thanks to its rigid body, can quickly climb walls. It is native to the Mediterranean region, although it has spread to other parts of the world. Scutigera coleoptrata is harmless to humans but, when it feels attacked, it can sting it: it is a defense mechanism. However, the insect bite is not dangerous: it is comparable to a bee sting. It causes mild pain and discomfort in the area of ​​the bite, but it goes away within a few hours.

Although huge and seemingly menacing, this creature is therefore extremely peaceful. If not disturbed, it can also be useful in warding off other unwanted creatures in the house, such as spiders and cockroaches, as it is an insectivore. The Scutigera coleoptrata generally ignores humans, but it is certainly difficult to ignore. It is not uncommon to find it on the walls of a house. That huge Scutigère on the doorstep wasn’t a particularly welcome guest for the Reddit user. Could you have kept your cool in such a situation?