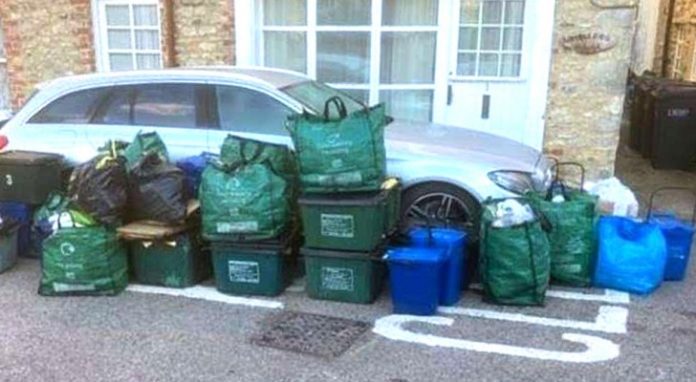 Among all the problems that we face every day in the street, whether on foot or in the car, the most common are certainly those related to parking. Cars parked where they shouldn’t be, or left in the most absurd and “messy” positions, certainly don’t make life easy for many people.

And sometimes we reach excesses that are really difficult to explain, before which one can only wonder how it was possible for the motorist to make such a gesture, without being aware of the environment and the prohibitions. The same goes for the owner of the car in the story we are going to tell you. The car was parked there for two days, blocking the way for garbage collectors who were supposed to pick up the garbage. Revenge was therefore not long in coming.

We are in Branscombe , in the English county of Devon. This is where the owner of a silver Mercedes got the right idea – so to speak! – to leave your car where it should never have been. Recklessness, carelessness, distraction, arrogance: it’s not clear why he did this, but the point is, the car didn’t go unnoticed.

If there are no parking signs, there must be a reason, and in the case of the “leave it free” written in big letters on the asphalt just under the Mercedes, the explanation was very simple: the truck trash can . With the car parked there, access to the garbage collectors was blocked, making it difficult, if not impossible, for them to collect the garbage according to the daily schedule.

Faced with this situation, the residents of Parsons Lane – the street where the episode took place – decided to take countermeasures. Exasperated by the situation, and the bags of garbage piling up more and more, they took revenge on the motorist in a way they will not soon forget.

They took the garbage bags and used them to surround the car, so the owner would have a hard time leaving when he came back to pick up his car. The same difficulties were caused to the garbage truck. However, no one showed up and as the latter grew more and more smelly, residents called the police, the owner was found and the Mercedes was removed. Not before, however, taking pictures of the Mercedes and sharing them, thus letting everyone know the story.

What do you think of this revenge? Deserved or excessive?