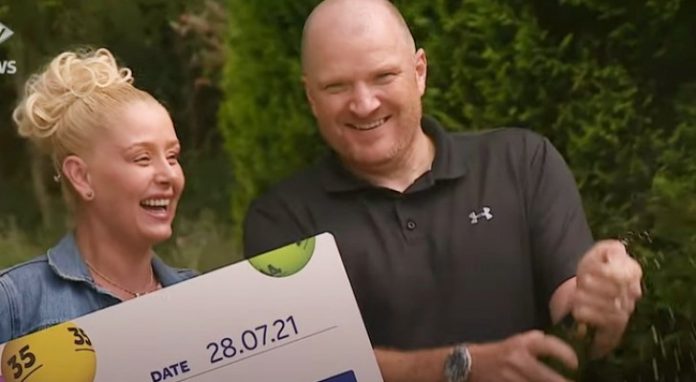 Can you imagine what it is like to see your life change in seconds? The odds of winning the lottery are very low, but despite this, people do not give up hope and keep trying their luck. We play a lottery ticket and we forget about it for a while: we go home, we go back to work, we go back to our usual routine. In this, Paul Drake may seem like an ordinary man: he, like many others, had played the British lottery. But just before going to work, he felt the need to check the results: at that precise moment, his life changed.

Paul is 47 years old and lives with Louise in West Lothian, Scotland. Paul is an employee of the Lidl supermarket and that day he was preparing to accompany two colleagues to work when suddenly he said he was struck by a nagging feeling: he felt the urge to check the numbers played on the Loto. It was 4:30 am and he was about to start his shift, but he never started it. In an instant he realized that he had won, although at first, he found it hard to believe it: when he realized he was suddenly a millionaire , he sat down in his car, stunned by the implications of this sudden revelation.

The man said: “I’m not an emotional guy, but I burst into tears. I ran into the house screaming and woke Louise to tell her. We couldn’t believe it.” Louise, a nurse, said: “I was very scared thinking that something was wrong, but he was shouting something about winning the lottery. At first, I thought it was 5 £ 000 and tried to go back to sleep. ” Friends, family, and colleagues, as soon as they heard the news, were very enthusiastic. Paul and Louis had worked their whole lives and in a matter of minutes, their life changed. But not just their lives: the man says he will use part of this exorbitant sum to improve the lives of those close to him financially. Another part of the money will then be reinvested, in the hope of starting a business in the future. Paul will certainly not give up a few fantasies: his career as an employee of the famous supermarket chain is undoubtedly over.