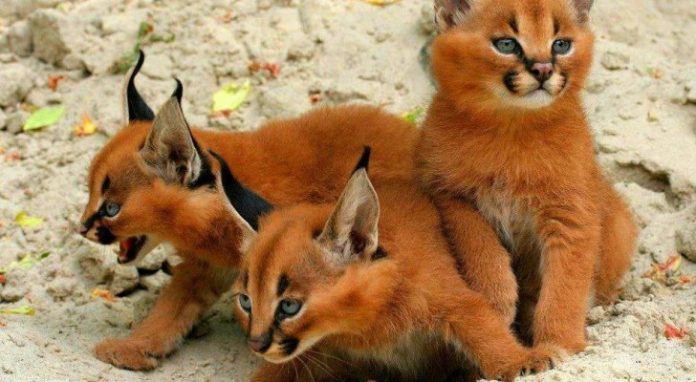 With the term feline, we refer to a wide variety of animals, the best known of all of us are characterized by a round head, short muzzle, and body covered with fur, striped, or spotted. In general, we distinguish the small from the big cats: among the first, there is obviously the domestic cat, among the last there are animals like the tiger, the lion, and the leopard. The difference between the two is not only due to size as big cats can roar, unlike cats.

However, the distinction between small and big cats is too narrow: between the two categories, there are many medium-sized cats, with their own characteristics. Among them, there is a feline that you may not know, but who will become your darling. .. This is who it is 🙂

#1. It is the “caracal”, commonly called the desert lynx: the name comes from the Turkish “karakulak”, which means black ears.

#2. He is a very skilled hunter: he feeds on small rodents, but he is also able to hunt predatory birds. During an attack on a herd, it can take up to 12 at a time.

#3. Its fur is generally light, in order to blend in perfectly with the sandy soil of the places where it lives. However, it can also be darker, depending on the region where it lives.

#4. Unlike other wild cats, the caracal is a solitary animal. It can live as a couple, but in general it is spotted alone.

#5. The young are raised in shelters under the ground or at the base of a tree, away from predators.

#6. In the past, he has assisted humans in hunting for his ability to catch birds. Some still keep the caracal in a domestic environment.

#7. It is classified as a medium sized feline, although its weight can also exceed 20 kg.\

#8. These cats occupy very narrow parts of the planet: they have been seen especially in parts of Africa and South Asia.

#9. Since the places where they live are very dry and are often affected by drought, the caracals have learned to survive on a minimal amount of water. Most of the water they need is taken through the prey.

#10. Like most felines, even these beautiful ‘cats’ sleep many hours a day.

#11. Despite his past as a domesticated cat, they are still wild animals, not used to human presence.

#12. The characteristics of the body make it a perfect hunter: the balance between agility, strength and size allow it to capture birds that rest on tree branches.

#13. The contrast between the color of the fur, almost orange, and the black streaks on its face make it a magnificent animal.

#14. The growth of the young is rather rapid, in order to acquire the necessary maturity to be independent, and to be able to take care of themselves.

#14. They are exactly the link between the small and the big cats.

Watch the video of this tender newborn baby … he will melt your heart! 🙂