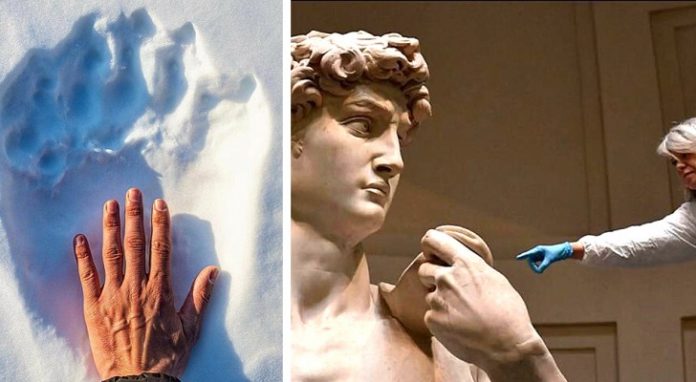 Everything, even the thing that seems most obvious to us and about which we think we know everything, is no longer the same if we change the perspective from which we observe: it is life itself that teaches us that.

Perhaps this is what makes the world around us and the universe that welcomes us so fascinating and never without surprises. In all of this, men’s curiosity drives us to seek new comparisons, answers to unresolved questions and undoubtedly leaves us speechless at images like the ones we are about to show you. What is it about? Places, animals, objects, and phenomena demonstrate perfectly that everything is in progress, that everything is relative and that nothing is acquired. Ready to amaze yourself and think about it with these interesting photo comparisons?

#2. I found this “little” leaf in the park and had to immortalize it next to me …

#4. The Titanic compared to a modern cruise ship: it almost looks like a lifeboat!

#6. I found my mother’s old cell phone and compared it with my current smartphone: a photo that sums up all the technological advancements

#7. A normal-sized cat and its “cousin” Maine Coon

#8. Nagasaki city just after the atomic bomb explosion and how it looks today

#9. Another comparison of technological progress: the tire of a 2020 Porsche put next to that of a 1970 Porsche

#10. The devastating effects of the fires in Australia in an impressive photographic comparison

#11. This black “spot” that we see in the center of Jupiter corresponds to North America, in relation to the size of the planet.

#12. Michelangelo’s David and its colossal dimensions

#13. Los Angeles with and without pollution: a whole different air!

#14. Half is my face, the other half is my daughter’s: nature can make you look incredibly similar!

#15. Another “spatial” comparison: this time, it is our “little” Earth that it is compared to Jupiter!

#16. My pencil portrait and the original photo: hard to find many differences!

What do you think ? Awesome, isn’t it?