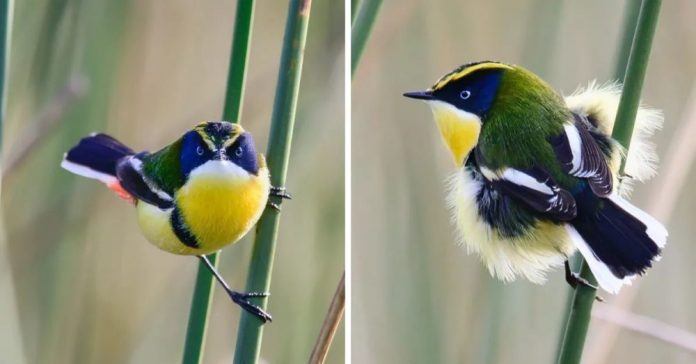 Siete Colores (seven colors) is an attractive, multicolored little bird of fresh and brackish marshes with rushes and reed beds. The species feeds actively in rushes and adjacent vegetation, sometimes on adjacent muddy shorelines. This Boldly patterned and colorful plumage is unique among flycatchers. This bird should not be confused if seen well; note the bold white wing band and whitetail sides, which show distinctly in flight.

The Many-colored Rush-Tyrant is with a greenish mantle, blue sides of the head, black wings, and yellow underparts with a black broken breast band. A dull version of the adult with feathers fringed with brown is immature. The iris is pale in the adult but dark in the juvenile. The adult in the southern end of their range and in the Titicaca Basin have a dark iris. It forages exclusively at cattail stands and reed beds in freshwater bodies of water. The adult plumage is unmistakable in its very specific habitat. The immature superficially resembles a Wren-like Rush-Tyrant.

These Birds Only Grow To Be About Three Inches Long On Average.

These birds can be found along the coastal lowland of western Peru. It is also local to large bodies of water in the Andes. They also occur in Argentina, Uruguay, Bolivia, Chile, and southernmost Brazil.

They managed to have seven different colors into their tiny package despite being so tiny.

They Have Got Their Nickname Siete Colores Due To Colors, Which Means “Seven Colors” In Spanish.

The Largest Concentrations Found In Argentina And Uruguay, With Pockets In Peru, Bolivia, Chile, And Southernmost Brazil.

They hunt for insects in the marshes and reeds surrounding lakes and rivers. They have unusually large, strong feet for their size, so it helps them perch on the reeds while waiting for prey.

They Can Be Hard To Get A Clear Pic Even Though Their Colors Make Them Popular Photography Subjects.

These birds are quick and agile and don’t stay much in one spot long enough for a photographer to compose and focus a shot.  [h/t: American Bird Conservancy]