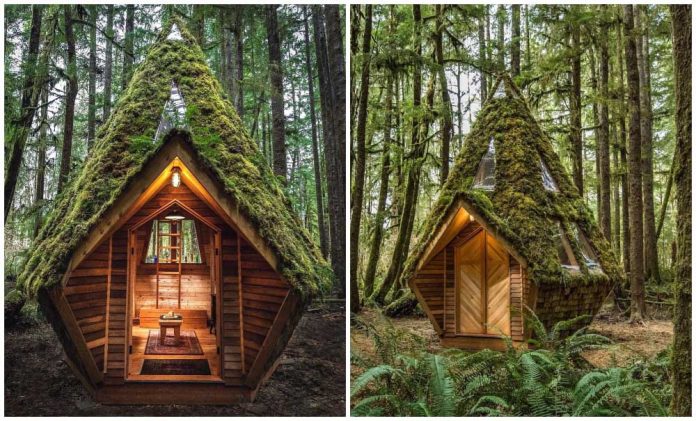 We all seek refuge from life’s constant demands by visiting an isolated mountain cabin sometimes. The unplugged allure of these backcountry cabins has received some popularity by launching coffee table books, TV shows, and a massive social media following, tapping into escapist urges and dreams of a simpler, disconnected lifestyle. You can spend your time scrolling through carefully curated feeds of winsome cabins of every type, from sleek A-frames to traditionalist log behemoths replete with stone hearths on cabin-centric Instagram accounts and hashtag lists with hundreds of posts and followers.

Some of the most eye-catching and whimsical examples to be found on these accounts are the work of cabin-builder extraordinaire Jacob Witzling. He has achieved renown for his one-of-a-kind designs and reuse-recycle ideology, using salvaged materials to create his tiny masterpieces. He’s now embarking on building his magnum opus with the help of his life partner Sara Underwood: a place called Cabinland with five unique cabins under his belt.

This off-the-grid oasis which is nestled among an abundance of trees, ferns and moss on a remote patch of lush woodland in the temperate rainforests of Washington State will consist of eight-to-ten handcrafted, artisan cabins when completed. Each cabin will be made using both new and recycled building materials. It will also have its own unique design and purpose. The 15-acre plot of land (which originally housed several now-dilapidated logger’s cabins and campers) is a perfect spot for Witzling’s self-sufficient vision is located thirty miles from the nearest town and cut off from modern utilities. Portable generators will be used to provide power. Water comes from the nearby stream and a new well is dug. There are a composting toilet and outdoor showers too.

Two cabins have been completed since construction began at the beginning of this year. The Diamond House which was first made was constructed with a broad, hexagonal base topped with long beams tapering upwards to a diamond-pointed roof. The ground floor is filled with a cozy living room with a stove and chic furniture, and a ladder-accessible loft space has been outfitted as a bedroom. It looks like something out of a fairy tale; a cozy place to hide away from the world with weathered shingles taken from one of the old logger’s cabins covering the base and vibrant moss coating the roof. There’s also a freshly treated wooden front door and porch.

Pump House is the second house, which was built with a more pedestrian purpose in mind: to house the pump for the new well. Creating a striking structure with an angular, lopsided roof heaped with moss and a triangular-patterned door, Witzling and Underwood didn’t skimp on the design.

The culmination of a lifelong love of cabins for Witzling which will be connected via a network of trails in this woodland community who first became interested in the art and functionality of cabin-building as a child reading his father’s copy of Handmade Houses: A Guide to the Woodbutcher’s Art. Witzling has gone on to design and construct four other stand-alone, off-the-grid cabins in forested spots around the US, after building his first mainly-upcycled cabin at 22 for a mere $800. Each is different, but they bear his signature stylings, like polygonal frames, geometric-patterned walls and doors, and moss-covered roofs. Witzling makes all his cabins on the small side, measuring no more than a couple hundred square feet at the base, adding loft spaces for bedding and extra storage.

The Cabinland venture is a joint effort and dream of him and Underwood, who is known to the world for her work as a model and actress. They first met when Underwood contacted Witzling hoping to use one of his cabins for a photoshoot, only to discover a mutual love of cabins. They constructed the Truck Cabin, a quirky, 40-square foot cabin built into the flatbed of a 1979 Ford pickup, and toured the US to find the perfect spot, eventually finding what they were looking for in the beautiful Pacific Northwest after brainstorming the idea for Cabinland. They have worked full time in this project with Underwood investing a significant amount of personal capital and Witzling taking a sabbatical from his job as a second-grade teacher.

Witzling and Underwood are keeping Cabinland’s exact location a well-guarded secret until it’s complete and ready for a full unveiling roughly half a year into their estimated two-year build. The two are documenting the journey with a Youtube series and dedicated Instagram page. Witzling also shares instructional videos, like how to make a patterned floor or properly moss a roof with their Cabinland Youtube videos. They also show how viewers treated to insider looks at the challenges and rewards of the design and construction processes (as well as Witzling’s goofy personality).

There is a possibility that some of the cabins will be open for renting when the site is completed while the pair hasn’t announced any hard-and-fast plans for Cabinland’s future. So the cabin-lovers have to make do with the dreamy pics and videos of Witzling’s bold, innovative cabins set against the misty, verdant backdrop of a Pacific Northwest forest until then.