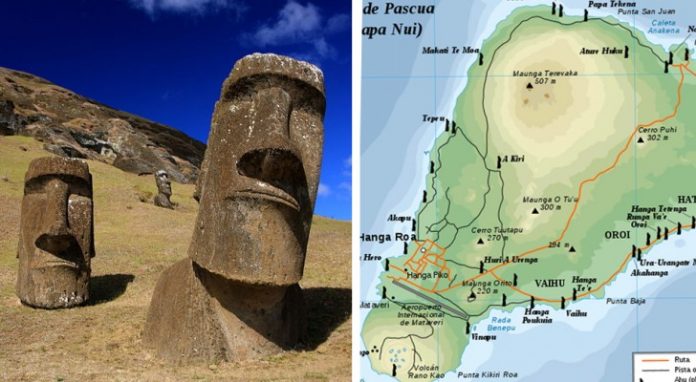 Rapa Nui, better known as Easter Island, is famous for being the “home” of giant stone heads. The existence of a population on this island in the Pacific Ocean was only discovered in 1722 by a Dutch explorer: mysteries have emerged since then, and some still occupy the minds of researchers.

The puzzles were mainly focused on the heads: we wondered about the modes of transport and their function. Well, a team of anthropologists has announced that they have made a great discovery on Easter Island, which will put an end to several mysteries.

They are called Moai , the stone heads that inhabit Easter Island, monolithic statues up to 10 meters high, and with a weight that in some cases even reaches 80 tons. These have raised many questions about the modes of transport. The heads, in fact, are scattered all over the island, almost all near the coast .

According to the researchers, the frontal decorations were made when the monolith was still “lying on the ground”, while those on the back only when it was erected. It is not yet known whether the blocks were transported by sliding them over trunks or whether the use of ropes and human strength was required.

Over time, it was discovered that the statues were not just heads, but that they had a whole body that the accumulation of sediment over the centuries had buried.

Thus, we understood how the heads were made and what was hidden below the ground level: it remained to understand what they symbolized and why they are in the places where they are visible today.

The answers could come from the expedition of a group of anthropologists, led by Carl LiPo.

Lipo first noticed that on the island there was no source of drinking water and most likely there was none either in the past, when the Rapa Nui people lived here from 1400 to 1650. How is the establishment and survival of a people in a place without potable water possible?

“The soil of Easter Island is volcanic in nature, therefore very porous: rainwater is absorbed quickly, which is why here there are no rivers, lakes or streams”, a said Carl Lipo. However, the anthropologist has found that when the tides are low, rainwater mixes with that from the sea, resulting in brackish water that can be consumed . According to experts, these brackish water sources near the coast would have been sufficient to guarantee the possibility of living on the island.

The most interesting fact is that the statues seem to be placed  near these puddles : “The more we looked around, the more evident this correlation was. In places where there was no Moai there was not even of brackish water, ”said LiPo again

Viewing statues as indicators of natural resources helps to understand a lot about their location!

New perspectives open for the study of Easter statues: Unfortunately, given the lack of historical sources, the hypotheses put forward are destined to remain such. However, the study published in the Hydrogeology Journal  appears to be particularly congruent with reality.