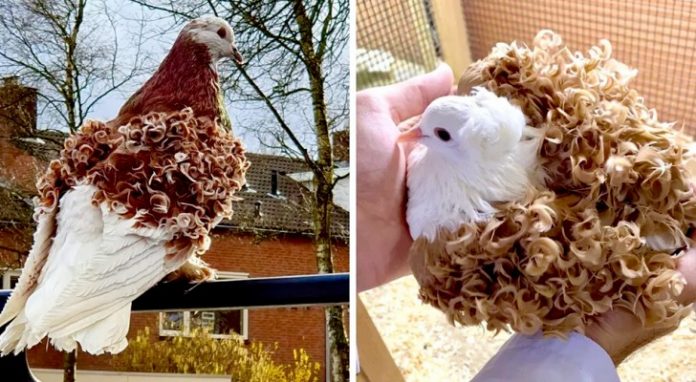 Admittedly, pigeons are not exactly one of the most beloved bird species; very often associated with dirt and pollution, not all of them have the characteristic gray plumage that we all know; did you know that there is a subspecies of pigeon that has colorful plumage and very, but very curly wings? It almost looks like these curly pigeons got permed! Must see to be believed.

Curly Pigeons were born as a new breed of birds on some selective breeding farms, and like many others in the domestic pigeon family, they are all descendants of the Columba livia or rock pigeon. Their characteristic? The curls cover the outer part of their wings.

Curly pigeons are so-called because of the curls they have not only on the outside of their wings, but also on their legs! But, unlike the rock pigeon, they not only have a more “creative” plumage, but also different colors.

In fact, the curly pigeon has plumage varying in color from yellow to red, pink, then beige, gray and blue; these are certainly not the usual birds that we meet in the squares of our cities!

And even, they are very beautiful and artistic birds to admire!

And who would have thought that even pigeons have a certain charm to discover?

Curly pigeons are part of the family of domestic pigeons, so it is not difficult to buy one … Does this sound appealing to you?