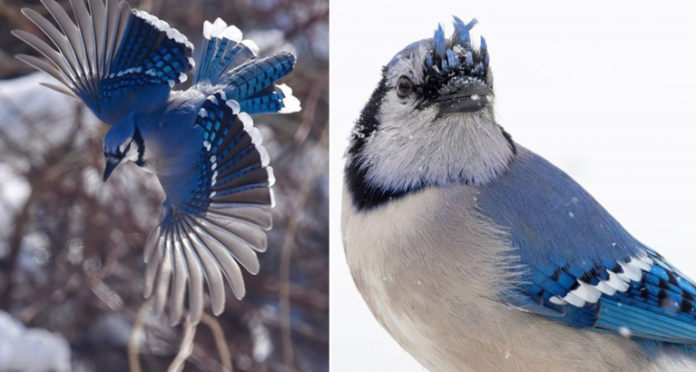 Bluejays are one of the most recognizable songbirds in nature. Central and Eastern parts of North America and southern Canada are places where you can find them. Most surprisingly, male and female Blue Jays look exactly the same. It’s customary for male birds to be a bit more colorful and flashier than female birds in the bird world. This is because males to catch the attention of the female bird; this is called sexual dimorphism.

But this rule doesn’t apply for Blue Jays. But the males are typically a bit larger than females. Their courting and mating behaviors make it obvious, which is which. They usually are in groups of three to ten birds. There is a single female blue jay who basically judges the males to pick which one is most suitable within these groups. It’s the creation of the nature of The Bachelorette. When the female bird flies, the males all follow, and when she lands, males do the same.

Blue Jays are not really blue.

When you think of Corvids, the Blue Jay isn’t always the first species that comes to mind. Jays are certainly more “showy” than some of the other species in the group. For that reason, I thought it would be fitting to focus on the bright and beautiful wings of the Blue Jay. When a bird lands at the minimum focusing distance of my lens, I like to look around at the different parts of a bird like the wings, tail, or beak. Although it’s most common to focus on the eye, sometimes there’s a story to tell elsewhere. This photo is for @espenhelland and his hashtag #corvidnotcovid @sonyalpha A7RIV + 200-600 | 600mm, f/6.3, 1/1600th, ISO400 |

It seems to be like our eyes are playing tricks on us. Most birds like Cardinals, have colored feathers due to pigment. For example, if you were to crush a Cardinal’s feather into powder, it would be red.

This Blue Jay was giving me a real Horned Lark vibe. I’ve photographed Blue Jays many times with their full crest on display, but never with just the front of the crest risen. I’m kinda digging it. Maybe “Horned Blue Jay” is a more fitting name for this individual. @sonyalpha A7RIV + 200-600 | 600mm, f/6.3, 1/1250th, ISO500 |

And when you do the same to a Blue Jay’s feather, it would be brown.

New video up! I spent the day at Miracle Farms photographing some winter birds in some heavy snow and wind. It was a pretty fun day despite the conditions. Check out the link in my bio!

Light scattering which is a neat little trick in nature is used by Blue Jays.

The beautiful feathers of the Blue Jay. This photo is a heavy crop of an image taken with the new @sonyalpha A7RIV. There is so much detail in the 61 megapixel files, that it will definitely expand my creativity in the field. I have a new video out talking about my initial thoughts on the camera, check out the link in my bio!

All the colors pass right through them, except for blue, when visible light strikes their feathers.

Landed in France yesterday, and have had a great time, so far. Very beautiful cities, that remind me a lot of Quebec. One thing I’m very much enjoying is obviously the birding. Every species is a lifer for me. I’ll have to start editing my photos so I can upload some here. For now, enjoy the Blue Jay from my backyard, taken one day before the snow began to fall. Is anyone else setting up their yard to do some backyard bird photography this winter?

So, the blue is reflected, and then we see blue.

You could test this by getting a blue jay feather and wet it. It will turn brown since you’re interfering with the mechanism within the feather that reflects light.

Depending on the way you look at them, Blue Jays can also be bullies. It’s not uncommon for these birds to gather in groups and take over bird feeders, driving anything that’s not a blue jay away.

This pack mentality helps keep them safe as a band Blue Jays can drive off larger animals such as cats, hawks, raccoons, squirrels, and many other animals.

These birds can make for some pretty tough gangs; they’ve even been known to dive at humans who got close to their turf.

The video below will help you to learn more about these amazing birds.