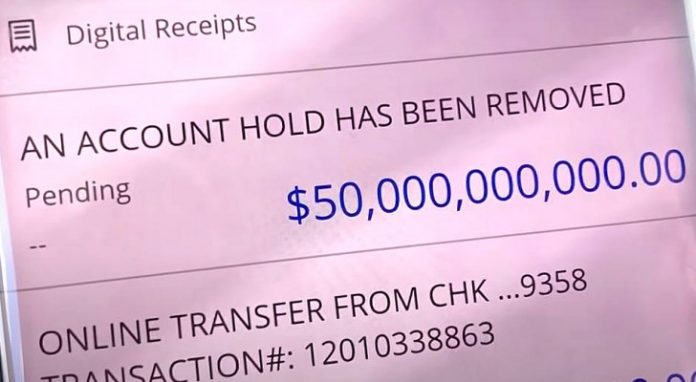 It was beautiful as long as it lasted. One could not summarize otherwise what happened to an American family from Louisiana, who became famous all over the world thanks to the curious episode they witnessed.

Imagine the scene: you check your bank account balance and, almost by magic, you find out that a transfer of no less than $ 50 billion has been made. We wrote billions, not millions, an astronomical number, to say the least, deposited there by the Chase Bank. Unfortunately for the family in question, the “donation” – if you can call it that – was the result of a colossal mistake on the part of the bank.

The story was told by Darren James, a 47-year-old real estate agent from Baton Rouge, Louisiana. When he returned home one day, he found his wife in an obvious state of surprise. “Look at this!” She said, showing him the account balance on the phone screen, “we have $ 50 billion in the account”.

“The only thing we thought about at that point,” James continues, “was that we didn’t know anyone with that much money, so there must be something weird. A rich uncle? A distant relative to them. Did it make a present? Unfortunately for James, none of that, just a monumental mistake on the part of the bank.

A mistake that nevertheless made Darren and his wife the twenty-fifth richest people on the planet, at least during these four days when the money remained in their bank account. “It was a great feeling to see so many zeros,” comments the 47-year-old, I was a billionaire, even if we could not do anything with this money, we could not have spent it, it would have been theft. “

The Chase Bank, questioned by the media about what happened, spoke of a ” technical problem ” which affected a number of accounts, including, of course, that of James. The couple contacted the bank several times, but for four days nothing helped: the money stayed where it was.

After those days, of course, the bank took back his money, which returned to where it came from. From what we have learned, this is not the first time that similar “mystery” credit episodes have occurred in the United States. Who knows what it feels like to have all that money!