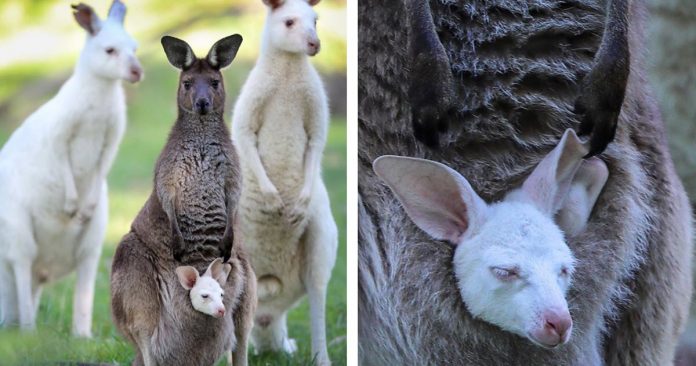 There’s a lot of diversity in the animal kingdom. You may think that you’ve seen everything imaginable under the sun. But still, nature will surprises you with something completely new and wonderful. A baby Eastern Grey kangaroo was born last month and, he’s albino, and looks just like his daddy. The baby kangaroo’s mother mated with another kangaroo that has the rare genetic mutation of albinism. The cute little Joey was born at Panorama Garden Estate southeast of Melbourne, Australia, on the Mornington Peninsula.

Annemaree Van Rooy is the owner of the unusual kangaroos. According to her, the joey’s uniqueness was apparent the moment he popped his adorable little head out of his mother’s pouch. He is entirely white and has no pigment anywhere in his body as he’s a true albino. His mother is black and grey like all the other kangaroos. According to Mark Eldridge, Albino kangaroos are extremely rare. Van Rooy has welcomed an albino kangaroo onto his estate in spite of albino animals being so rare. She has now several kangaroos after getting her first one eight years ago.

A “mob” is a group of kangaroos and there’s a mob of about nine albino kangaroos right now on Van Rooy’s estate. As they’re unable to hide from predators, life in the wild is hard for albino kangaroos. They also have poorer eyesight, which puts them at risk of several other problems. Finding a mate when is also difficult as mates see them as less desirable. Poachers hunt these rare beautiful creatures since we manage to mess up much of the beauty and diversity in the world. So they’re safer on an estate as they are.

They are safe at living at the Panorama Garden Estate. As there’s a gorgeous all-white peacock on the estate as well, they’re also in good company. His name is Alexander the Great.

Here’s a video of the albino kangaroos below.