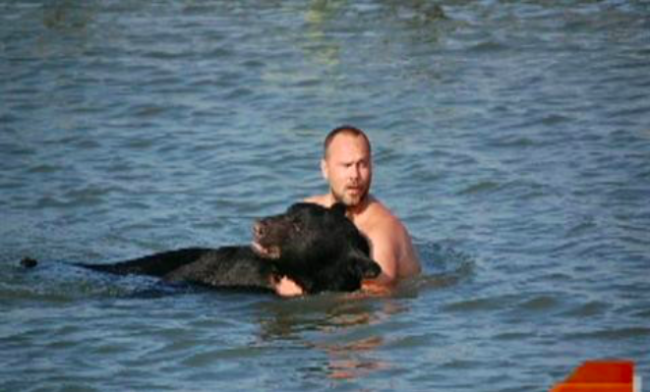 There is a brave person inside all of us. But sometimes, not all the people are ready to sacrifice and risk our own wellbeing to save an animal.

But, Adam Warwick, a biologist with the Wildlife Commission risked his own life to rescue a 400-lb bear from drowning.

The bear has followed his nose, left his home in Osceola National Forest, and went to a residential area in Alligator Point, Florida.

They informed the wildlife officials and decided to sort things out when Florida residents spotted a black bear sniffing through their garbage.

They planned to shoot the bear with a tranquilizer dart, but the plan didn’t work.

As this 400-pound bear started to panic and got confused, he ran into the ocean and started swimming into the Gulf.

Adam was there to help him as the animal couldn’t move his legs and couldn’t swim by then. He jumped into the water to save the bear.

“The bear started to swim, started to make the four-mile swim across the harbor. And so, I looked at (a colleague) and I said, ‘I’ve got to go out there and stop him.’

So, I took off my shirt and shoes, jumped in the water, and swam in the direction to head him off and keep him from going into deeper water.

Once I did that, I got in front of him, tried to create some splashing and some commotion, and tried to get him to go back into shore. But he wasn’t having any of that.”

“The scariest part was probably when he decided — he started looking at me as if he wanted to climb up on me to keep from drowning and, at one point, he reared up on his hind legs, so I’m looking at a six-and-a-half-foot tall bear.

Instead of lunging forward, he fell straight back and was submerged for a couple of seconds and, that’s kinda when I moved in.”

He held onto the bear and swam to the shore, which was 75 feet away. Adam did his best not to let him go under while the bear couldn’t keep his head above water.

Finally, he brought the bear to the shore safely, and a backhoe operator helped to load him onto a truck and return him to the Osceola National Forest.

Adam was not injured and had only a few scratches.

He is a brave and a kind-hearted man.