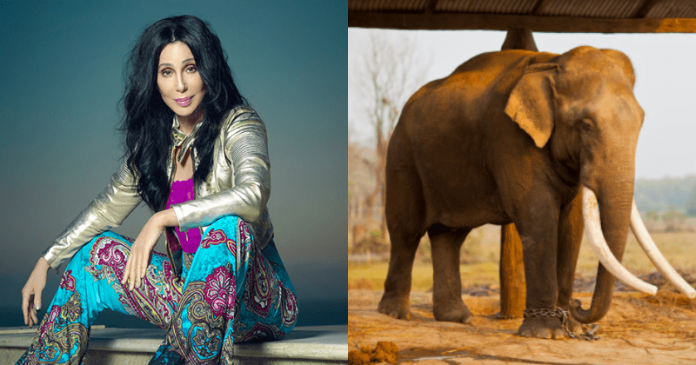 Once the Pakistan court ordered the transfer of Asian elephant to a proper sanctuary, the US music icon was elated too.

Due to the Coronavirus pandemic we all have been homebound for a while and we have all felt the wrath of cabin fever. So, just imagine how animals in cages must feel like. We felt like we are losing our minds, despite staying inside the comfort of our home. Just think how these captured wild animals in the zoos must feel like.

According to The Guardian, music icon and activist Cher shared her happiness with the world after a Pakistani court ordered the freedom of a lonely elephant named Kavaan. Kavaan is 33-year-old and originally belongs from Sri Lanka. A four-year-old campaign started by Cher fought for his release. Cher was very sad to see him living alone and being held miserably in chains inside a small enclosure, with only a small dirty pond to play in when she saw pictures of Kaavan in Murghazar Zoo.

Cher shared the happy news with all her fans in Twitter after his release. She wrote, “We have just heard from Pakistan High Court Kaavan is free. Can’t stop [crying] … Kaavan is free. [Crying] down my cheeks, but he’s free and Mark Cowne did it.” Many years ago, outrage over Kavaan’s treatment in the zoo went viral when a petition to release him garnered over 2, 000, 00 signatures.

Half of our adult lives.
Really Years….& Would Never Known about it Without Crew.
I Told Him, But @markcown did it.Just Got Off Phone With
Gina (Cowne) We Were Sobbing
& Laughing.

In 1985, Kavaan arrived in the Islamabad zoo when he was just one-year-old from Sri Lanka. As zookeepers were concerned about his apparent violent outburst, he was temporarily held in chains in 2002.

will you go visit him when he gets to a sanctuary!? pic.twitter.com/nF806DxHlH

The Islamabad High Court ordered wildlife officials to consult with Sri Lanka to find Kavaan a suitable sanctuary where he will spend the rest of his life. Al Jazeera reported that the court said, “The pain and suffering of Kaavan must come to an end by relocating him to an appropriate elephant sanctuary, in or outside the country.” The court criticized the zoo for not taking proper care of Kavaan for the past decades and for not maintaining the standards.

I feel with my whole ❤️ that these are the words that Kaavan and the rest of the 🌎 are speaking at this moment, ” THANK YOU MARK, GINA, ZOOBS, JEN & CHER❤️🐘🙌🤗 pic.twitter.com/clUvzqhZsK

The court also ordered other animals like brown bears, lions, and birds to be temporarily relocated to a different location while the zoo improves the living conditions for the animals. Kavaan’s lawyer, Awais Awan said that his case was different. He said, “Since Pakistan is the only country where there are no Asian elephants. Any option would be better than the existing option. Experts and the government should determine what’s best for him.”

OMG I’m so glad he’s Free and honestly I think you will be just fine Cher 🌈🥰💙🐘🎂👄 pic.twitter.com/3XryFrS9Qk

The zoo officials have denied that the 33-year-old elephant was chained up in the past. They lied that he was just in need of a new mate after his partner died in 2012. On the other hand, the activists argued that Kavaan was kept in the open during the scorching heat which easily touches 40 degrees during the summer. Asian elephants have the ability to roam thousands of kilometers through deep tropical and subtropical forests.

One of best news since ages!
I will drink a big bottle of prosecco or sect or champagne or wine or beer. Or all together 🍾🍾👍🐾😂🙏👏🎊🎉🙏#kavaan the #elephant is free after 45 years!
Makes me very lucky! Thx to @anikasleem #Cher & all others! #God bless you 🙏

But, Kavaan only had little space and was only provided with limited shade. Mark Cowne, CEO of Free The Wild which he runs along with Cher said, “It’s so exciting. It’s remarkable … I’m so happy for Kavaan. We were concerned about his mental health; he was in a very bad condition. We really wanted to help him. He had been through a terrible time, locked up for 26 years, chained up for all that time.”