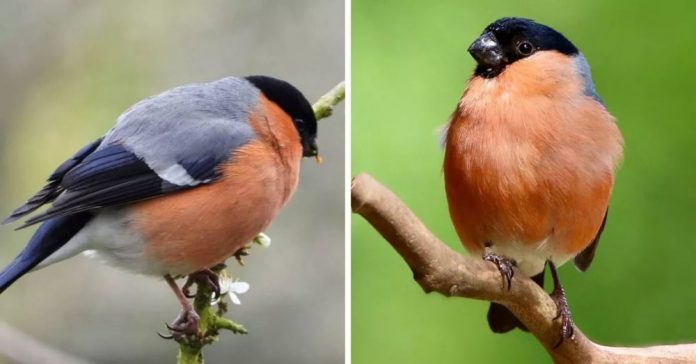 There are names that raise your eyebrows and seem to have nothing to do with the actual appearance of the bird. But some species’ name, or nickname, is perfect for them. Here, the Bullfinch – it’s most certainly bulky and fluffy.

Eurasian Bullfinch is a bulky bull-headed bird. The Male bird has a grey mantle; white rump, contrasting with a blackish tail. They have blackish wings and only one pale wing bar. Underparts are pink-red, with white vent.

The Eurasian Bullfinch Is A Round Little Bird With A Vibrant Peach Chest.

According to the Academic descriptions of this bird, it is a “redbreast”, “pink-red”, or “rosy breast”, but clearly, this stunning bird is peach-colored.

These Birds Are Common Throughout Europe And Asia, With Habitat Stretching All The Way From The British Isles To Japan.

VOICE: sounds by xeno-canto
European Bullfinch’s sound a quiet, low, melancholy whistled “peeu” or “pew”.
. It is a weak, scratchy warbling, alternating with soft whistles and is audible only at close range.

HABITAT:
European Bullfinch habitat in woodlands, coniferous and deciduous, with dense undergrowth and in cultivated areas. They can be also seen in orchards, parks, and gardens.

RANGE:
They can be found from Europe to Asia and Japan. This species breeds across Europe and temperate Asia.
Even though it is sedentary and resident, northern birds migrate southwards in winter. They move short or medium distances.

BEHAVIOUR:
They are shy and quiet birds. They fly from bush to bush. It is fond of buds in winter and spring and causes important damages in orchards.

The Females Are A More Of A Soft, Pinkish Beige While The Males Are Brightly Colored.

They are always in pairs or in small family groups. They perch mainly within the tree cover, rarely on the ground. They may form flocks of about 50 birds in spring.

These birds feed mainly on buds in spring. It lands on the tip of the branch where the buds are. After that they moves slowly towards the trunk and feed on buds when they lack seeds.

European Bullfinch brings food to the chicks, in special pouches situated at the base of the bill, on each side of the tongue during nesting season. Many of the other Fringillidae carry food in their throat.

Male enhances the beautiful color of its breast, with dropped wings in order to expose its white rump, while is waddling around the female during courtship displays. The pair is formed when the display start with a feigned attack from female to male. There is no aggressivity between them.

The Only Members Of The Finch Family That Have Specialized “Food Sacs.”

Male walks to female, with bill pointed at her and tail slightly sideward until it touches the female’s bill. After it hops on the side and displays it again, both mates do it again together. During this courtship they utter soft whistles. When the male regurgitates seeds into the female’s bill, she fluffs its feathers, bowing and turning from side to side.
The male brings her twigs and rootlets when the female builds the nest. They nest solitary and silent.

Female lays 4 to 6 pale blue eggs, mottled with red-brown. Incubation lasts about 12 to 14 days, male help and feed the female. A mixture of insects and seeds, brought at the nest by the male are given to chicks. Later, both male and female collect food for the young.
Young fledge at about 16 to 18 days.
From early May to mid-July, they produce two or three broods per season.

FLIGHT:
They have a swift bounding flight, with rapid wing beats, alternating with brief period of closed wings. It has an undulating direct flight, when flying long distances. It calls while it is flying.

REPRODUCTION:
Their nest is built on a tree branch, or in a bush or thicket which is about 1, 20 à 2 meters above the ground. It is a loose structure built by female, made with moss, twigs, and lichens, and lined with hair, moss, and roots.

DIET:
They mainly feed on seeds and buds of fruit trees. Insects and berries are also used as their foods.

PROTECTION / THREATS:
Since recent times, the species is declining. Some major reasons behind this are, destruction of habitat with reduction of woodland edges and hedgerows as it has removed nesting places and food resources.
Bullfinches are impacted by the increased use of herbicides. They were often trapped as pests in orchards and farmlands until 1996. Now, it is only permitted under the license.
Corvids and weasels are European Bullfinch’s predators.