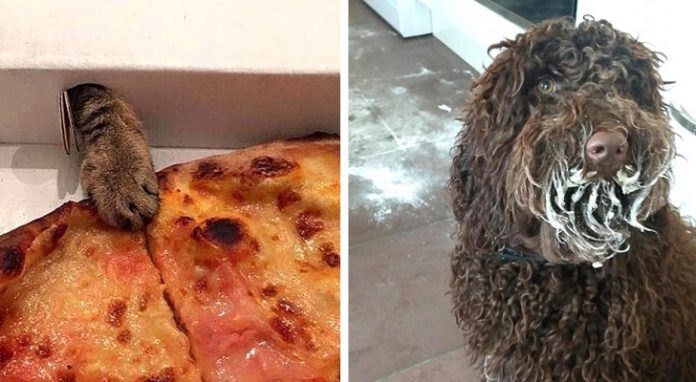 Life with a pet is not always a walk in the park. Of course, we love to take care of our four-legged friends, who know how to make us smile in the darkest moments, stay close, or have fun. However, anyone who has had a dog, cat or any other type of animal knows that sometimes they can leave us speechless.

What are we talking about? Of all those occasions where we left some food “unattended” for a while, then came back and found our faithful animal companion with a paw in the bag. The photos we have put together below show just these situations, which are as hilarious as they are irritating. You only have to look at them to smile again: after all, you can’t be too angry with these adorable … little thieves!

#1. A little paw that slips into the box!

#3. His gaze is almost “evil” when it comes to stealing the chicken

#4. Finally, after several attempts, he managed to open the jar and put his muzzle in his “booty”

#5. Sneak around trying to get my chicken off the plate: he didn’t notice that I was looking at him!

#6. Even ducks can be adorable food thieves!

#7. Who could have eaten this piece of bread?

#10. I think he really went too far with catnip this time …

#11. It is not difficult to know who stole the flour, is it?

#12. When he barked at the door, I went to open it and he snuck in to steal a piece of my pizza!

#13. I had food in my hand, he walked over to me and looked at me like that… what was I supposed to do?

#14. While the dog is sleeping, the cat enjoys it!

#15. Look at that little paw sticking out of the slit: amazing!

#16. “Watch out for the cat’s paws before closing”

Have you ever had animals in the house or seen animals that have been “caught” with their paws (and snout) in the bag like them?